A Movement of the Spirit: A Q&A with a New Catholic Land Movement family

This article was published in our Spring 2015 magazine, “The Next Generation: Passing on Our Faith and Farms.” Click here to view the PDF version of this article, and visit the CRL Store to purchase the full magazine.

“Peasant” isn’t a title that the typical American farmer would embrace—but Jonathan and Carrie Barker are not your typical farmers. Neither has a background in agriculture—both are the children of Protestant ministers, and earned degrees in the humanities. But shortly after graduating from Eastern University—and subsequently marrying and converting to Catholicism—the young couple made the decision to move to Jonathan’s hometown of Newport, Vermont, and in August 2012 they started a farm: New Peasant Farm. 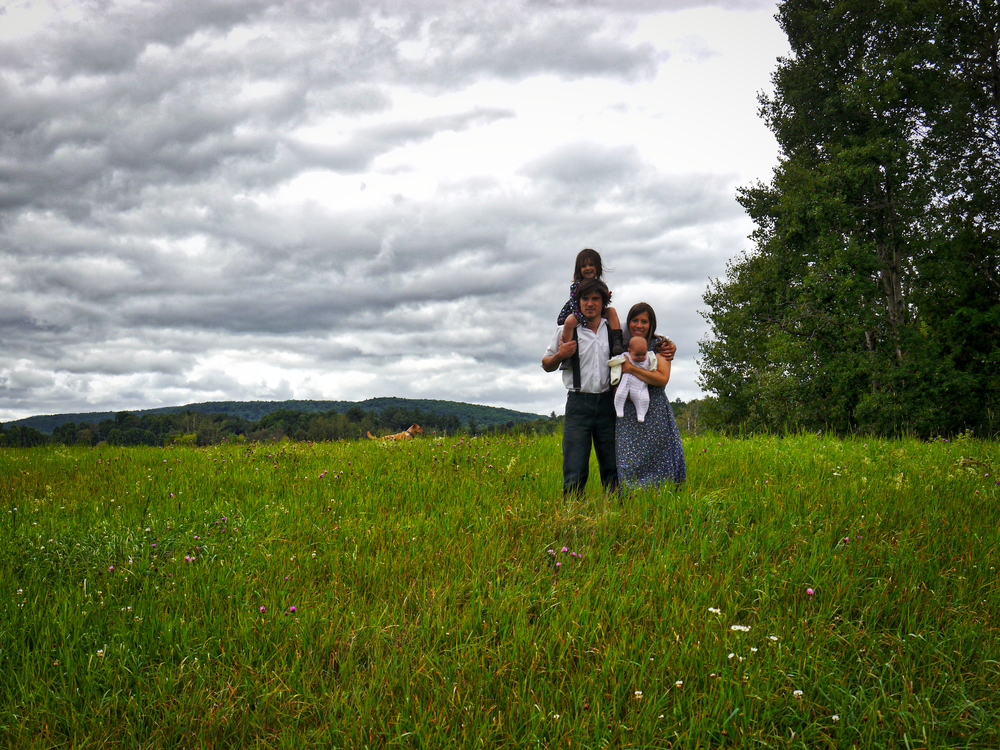 The name says a lot. The Barkers embrace the “smallness and humility” of owning and operating a simple family farm of no more than 12 acres, where they grow an assortment of vegetables—specializing in garlic– and raise their two young daughters, Clara and Felicity. The Barkers draw much of their inspiration from the New Catholic Land Movement, a loosely organized effort to encourage and equip Catholic families to transition to living and working on the land. CRL reached the Barkers by phone for a Q&A session to learn more about their motives and the realities of starting a farm:

CRL: Neither of you come from farming families. What made you want to embrace rural life and start a farm?

Jonathan: Becoming parents shifted things for us. When our first daughter, Clara, was born, we were living in a tiny apartment in a city in Maine. Carrie was working and I was in graduate school and teaching. We began thinking seriously about how we wanted to live and raise our children. We also became Catholic around this time, and also witnessed a lot of people our age struggling financially. All of these things came together to inform our decision.

At the time of our decision, we also happened to be reading the Catholic Land Movement authors. Because they wrote at a time that seems so similar to now, economically and politically, it made clear the necessity of repopulating the countryside.

J: We received a lot of inspiration from these thinkers who push against the modern status quo. We’re interested in creating new forms of community while also recovering older traditions. 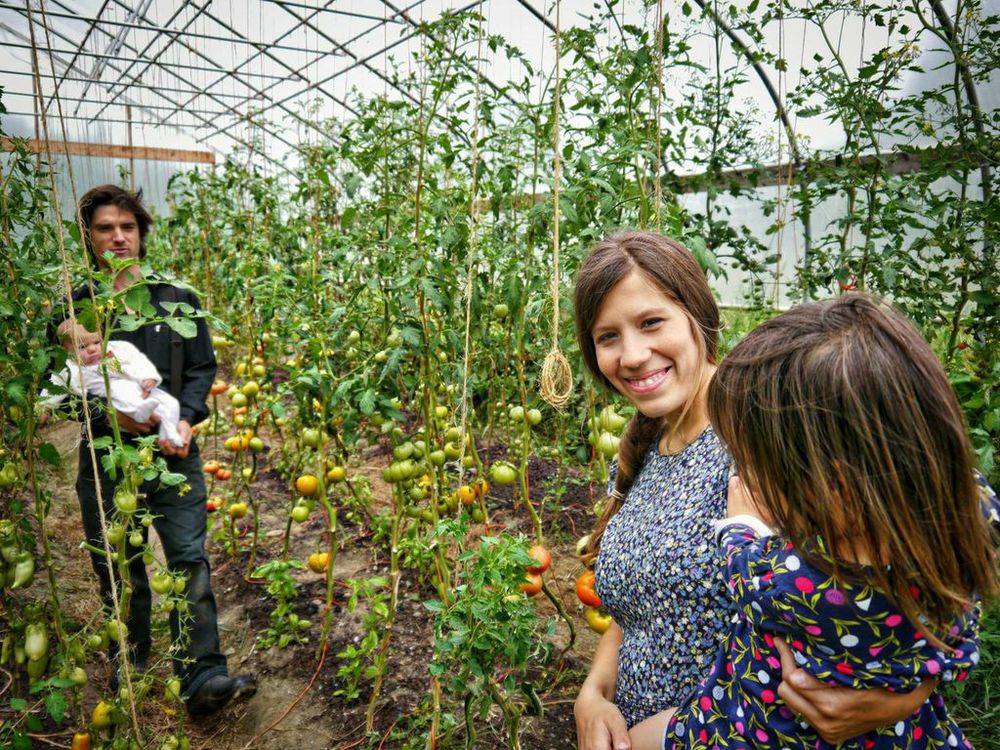 C: We realized that our lives and our friends’ lives weren’t going to be the same as we had thought they were. We just felt like if this all life is, paying rent and paying off your debt, something important is missing.

J: It was also about embracing humility, and trying to cultivate  in ourselves something like smallness and mindfulness to something other than our own ego. We wanted to respond to the lordship of Christ rather than ourselves. Not that the only way to be a Catholic is to live humbly on the land. But for us, it seemed like that was a good way to work on that.

CRL: Young people can be wistful about living on a farm, and often aren’t aware of the hard work required, day in and day out, and also the financial and economic difficulties of staying in business. How did you prepare yourself beforehand and during the transition? What’s helped in the process?

C: It’s definitely not easy. But because we moved to Newport before we decided to start the farm, we had a better understanding of what we were getting ourselves into. We also had a friend who had gone to an ag school in Vermont live with us for our first year. He basically taught us how to run a CSA [Community Supported Agriculture], so we were able to jump into it right away, instead of interning or going to school ourselves. As you can imagine, there’s been a lot of experimenting and trial and error.

J: Also we had already had a child so we didn’t have time as single people to go look around at all the other farms and see how things are done. We did have the real blessing of having our own property, and used that as an exchange with our friend. We split the profits with him. So over that year we learned a lot from him.

We also have an agreement with a local guy who allows us to use his tractors and trailers in exchange for storing them. And we’ve had a good number of people live here in the attached apartment and work with us for a period of time. Our community has been kind of “patchworked” together. Like the week we needed to get the onions in the ground, we happened to have a friend staying with us. I have no idea how we would’ve done it without that person randomly coming, but they did, and it’s great!

CRL: You’ve had the farm for over two years now. Does it look like it’s going to be sustainable going forward?

J: In many ways, we’re hobbling along. I’m still teaching full- time as a high school English and Christian doctrine teacher. So we’re still trying to figure out what the exact balance needs to be.

J: It all depends on the season. During the school year, I get up and go outside before school, come back inside and get dressed, eat break-fast, go to school, come home, tear off my tie and put on my jeans. In the summertime, it’s full time working outside.

C: It’s hard! I’ve thought many times when I’m out in the fields picking peas that it must look so idyllic from the road. But it’s not! I’m sweating and there’s a baby screaming and there’s a little girl who’s eating rocks. The biggest thing I’ve learned is what I can physically accomplish as a mother. A lot of what I do is washing vegetables, packaging them, writing the CSA newsletter. I’ve had to learn my own limits. I’m simply not going to be the one digging holes for pota- toes. Not to say that women can’t do those things, but it’s very challenging. Finding those things that really do work with parenthood is important. So it’s definitely a balance. I’ve been googling “how to be a mother when you’re farming.” There’s not a lot out there! Maybe I’ll write a blog on that someday.

CRL: Clara is 3 and a half and Felicity is 9 months old. You started the farm to give them a certain lifestyle. What values do you hope to instill in them?

J: We see a big part of their future education as seeing us as a married couple and a family. We want to prioritize spending time with our kids over getting rich.

C: Or even just dragging them around to a million extracurriculars. We really hope that we can be a family in our home and on our land a majority of the time.

J: Spiritually, I think this life is more conducive to prayer. We also think it’s important to demonstrate the value of being productive and having access to land and property. It’s a more just way of living.

CRL: A lot of young people seem disillusioned with modern life, and talk romantically about farming. So what’s the holdup? What are the obstacles preventing young people from getting out on the land?

J: Everything in modern society is designed to make it not possible.

C: And honestly we’re still trying to figure out if it is possible. It’s a big risk. Debt is a huge obstacle. And also there’s the real burden of leaving the city. It’s hard because you don’t have a peer support group.

J: We were blessed in having more manageable debt than most of our peers. And we’re also a community in our own right, as husband and wife. Doing this alone, without a network…I would really warn people against that. If we weren’t married I couldn’t do this by myself. You need some kind of community.

We belong to a parish out here, but the resources are thin. Most young people who go to college don’t want to come back. In general, it’s just harder to have faith in your community when you don’t see the young blood right there. Part of our struggle is to maintain hope.

CRL: So what gives you hope?

C: I think the biggest thing that keeps us going is that we have a vision. It might not yet be fully realized and the day in and day out may be difficult, but when we think about the hope that Jonathan could eventually be fulltime on the farm, that hope keeps us going. So we have to re-remind ourselves of that vision.

We celebrate the small steps. We started from nothing in terms of skills, so it’s incredible to just look back and see how far we’ve come. 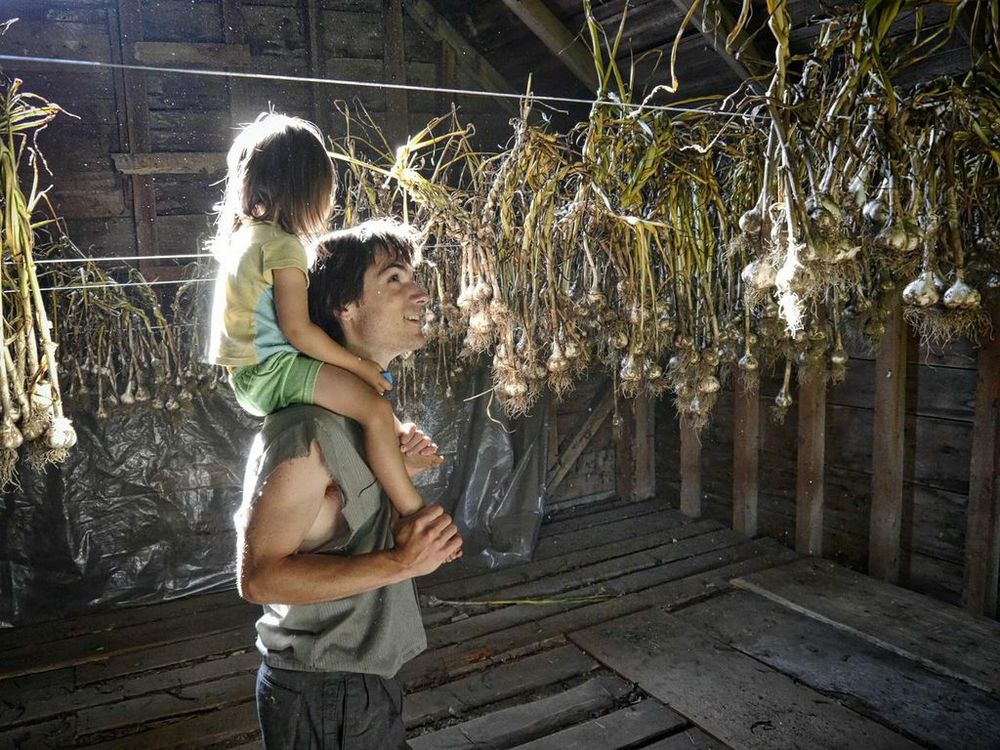 J: In doing the things we do, we feel like we’re legitimately participating in the things that help make our community more resilient. I’m not totally confident that this is true, but my hope is that if more young people were willing to do this sort of thing in a spirit of cooperation, people’s efforts could be more exponential.

C: It’s definitely a process. It’s the ability to see the large picture. Our children will have a lot more than we ever will. That in and of itself is something to celebrate, and that helps us to keep going. And we have seen our community build up. The more time you put into a rural place, the more you get out of it. It’s just not the same instant gratification of the city.

Like what you hear? Learn more about the New Catholic Land Movement at newcatholiclandmovement.org. And if you want to get your hands dirty, consider interning with the Barkers on New Peasant Farm. Find out how by visiting www.newpeasantfarm.com.