Each ring of the phone has the potential to be a new adventure for two religious sisters living in northwestern Pennsylvania.

“There’s no typical day because we don’t know exactly when the phone is going to ring or somebody wants this or that, or if we need to go out to the parishes,” said Sister Phyllis Schleicher, OSB.
Sister Phyllis, along with Sister Mary Hoffman, OSB, received a mandate in 1999 from Bishop Donald Trautman of the Diocese of Erie to “be a compassionate presence to the people” of McKean and Potter counties in the northeast corner of the diocese. The purpose was for two women religious to be a pastoral presence to the area by providing spiritual support to the parish communities through education, retreats, enrichment programs and faith sharing, and aid the most basic needs of the people in the area.  Thus began Catholic Rural Ministry.
Over Time
Thirteen years later, Catholic Rural Ministry is now an agency of Catholic Charities of Erie, but the sisters still bring a compassionate presence to people in an area facing unemployment, disability, drug abuse and household mismanagement. They hold retreats, plan prayer picnics, visit the sick and homebound, as well as visit the trailer courts and help with food, prescriptions, utility bills and food banks.
“We’ve helped people with their phone bills,” Sister Phyllis said. “They’ll have phone bills of $500 or $400 a month because the phone company put them on a certain plan and it’s not the right plan [for them].” 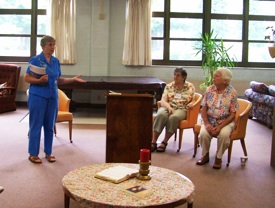 The sisters live in a farmhouse on the border of the two counties, which together is 100 miles wide. Their location puts them at an hour or less away from the 13 parishes and missions in their boundaries. They are funded by the diocese, Catholic Charities, private donations and grants.
While the sisters do much to help out at the parishes, including teaching classes, they do not replace anybody in a permanent position at a parish. They are consulters, not religious education coordinators, they said. They help whoever is in need, but do encourage church attendance.
“Pastors will give us a call about one of their parishioners who needs help, but doesn’t want to ask, so then we’ll contact them and ask how we can help: ‘Can we get you some extra food this month or what about an energy bill we could pay?’” Sister Phyllis said. “We work closely with the pastors to help those of our own faith, but we do not discriminate.”
The area’s industry revolves around lumbering, gravel and the Marcellus Shale, meaning that with all of the truckers passing through with their loads, it’s the gas stations, restaurants and bars that stay busy, said Sister Mary. Young people who get an education usually never return, she added. Over the years the pair has also witnessed, like much of the rest of the country, the lack of Mass attendance grow.
Yet, the sisters have also forged lasting relationships with the people.
“It’s been a very rewarding ministry, just by the people we’ve met and the good relationships that we have with so many people,” Sister Phyllis said. “It certainly is a need because the priests have enough at their own parishes.”
Oil City, Pa.
In 2007 Catholic Rural Ministry expanded into Clarion and Venango Counties, as well as parts of Crawford and Forest Counties within the Oil City Deanery under the leadership of Sister Marian Wehler, OSB, and Sister Clare Marie Beichner, SSJ. In January 2012, Sister Tina Geiger, RSM, joined Sister Marian when Sister Clare Marie was called to leadership within her community. 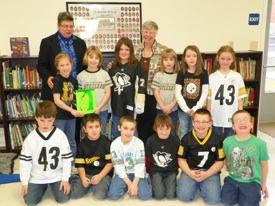 Although the Oil City area is a bit more populated than Potter and McKean Counties, it’s still very rural at heart and like other rural areas has felt the sting of the economy in recent years. Once a booming area, the birthplace of the oil industry now has a “big hole in the ground and a big hole in the economy” due to the oil industry’s move to Texas, Sister Tina said. Lack of transportation and fracking issues due to their proximity to the Marcellus Shale have also left the area depressed.
Like Sisters Phyllis and Mary, Sisters Marian and Tina never know what each new day will bring.
“Just today we got a call from a woman who didn’t have enough gas money and copay money to go to the doctor in the nearby town,” Sister Marian said, adding that the end of the month brings more money emergencies.
But the sisters don’t seem to mind. In fact, they seem to enjoy the variety.
“We do a lot of retreat work with the youth and the adults and we incorporated a parent component in all of our youth retreats and it has been accepted very well,” Sister Tina said. “We also do a lot of social service connections, helping with rent, rides to the doctors, money for copays, and a lot of presence, a lot of listening to people’s stories.”
Women of Hope
When Catholic Rural Ministry was established in their deanery, the dean at the time told them, “Your job description is 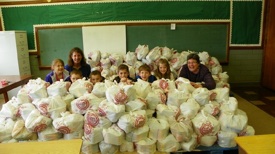 to be women of hope,” Sister Marian recalled.
“Our mission really is to bring hope and God’s compassionate presence in this deanery through social outreach, evangelization and other pastoral efforts,” she said.
Sister Marian and Sister Tina do their best to bring that hope and compassion to the 18 parishes and missions, four Catholic grade schools, one Catholic high school and three colleges that lie with their deanery. Besides social outreach and retreat work, this has included helping to establish a women’s bible study, a widow’s group and Sister Marian also ministers at a state prison. Both women are trained spiritual directors and also do what they can to support parish directors of religious education, coordinators, associates and deacons.
“In this time of parishes diminishing in numbers, I really notice that we’re connectors among parishes that might, in the future, be merged,” Sister Tina said. “The people know us and so do the pastors. It’s just another focal point where we can help that relationship building across the parishes and some of our larger geographical urban areas.”
Part of their ministry is just affirming those whom they encounter in the many good things that they’re doing, they said.
“Both of us feel very strongly called to be in this ministry of presence,” Sister Tina said. “You really can’t put a dollar value on a comforting glance or a listening heart.”
This article originally appeared in the Summer 2012 issue of Catholic Rural Life.
Photo 1: Sisters Phyllis Schleicher, OSB, and Mary Hoffman, OSB, lead a women’s retreat.
Photo 2: Sisters Tina Geiger, RSM, and Marian Wehler, OSB, pose with students at a local Catholic school.
Photo 3: Sister Tina Geiger poses with students and donated bags of food.