Fertile Ground for Service – Parish gardens in the Diocese of Arlington

Fertile Ground for Service – Parish gardens in the Diocese of Arlington

This article originally appeared in the April 17, 2012, edition of the “Catholic Herarld,” the Diocese of Arlington’s Catholic newspaper. Reprinted with permission.

As the Easter season celebrates the risen Christ, who emerged from a dark tomb and appeared to Mary Magdalene in a garden, so springtime revels in new life that pokes up and blossoms in gardens following winter’s lull.
The soil in four raised beds next to St. Veronica Church in Chantilly is filled with rows of new life that soon will nourish local families in need.
The garden is the vision of Sandy Greeley, a St. Veronica parishioner and food writer, who came up with the idea last fall. The vegetables will be offered to needy individuals at Christ House in Alexandria and also may help supply Catholic Charities’ Western Regional Office in Leesburg, according to Sally O’Dwyer, vice president of community services for Catholic Charities. 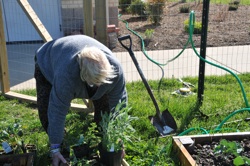 It’s a project sure to harvest many benefits.
“It’s a holistic thing that benefits the parish in terms of community and health; it benefits those in need. It’s a good thing all around,” said parishioner Sarah McClain, who grew up on a farm in the Shenandoah Valley and is helping Greeley care for and plan the plots.
To prepare for the garden, Greeley, who admits it is yet to be seen if her food-writing skills translate into a green thumb, spoke with a master gardener and had 1,000 pounds of compost placed into the beds.
Parishioner John Paul Smith, 16, built three of the beds for his Eagle Scout project. From start to finish, it took about four months for him to complete.
Smith said he was drawn to the project because it served both Christ House and the parish.
Early on a chilly, breezy morning last week, Greeley and two other young parishioners, John Dorham, 15, and his brother Michael, 11, tended the garden. 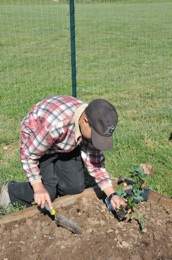 John watered as Michael plunged a spade into the dark dirt and gently nestled new plants into the ground.
“It’s a great way to get individuals involved, to teach kids where food comes from,” said Greeley, as she sprayed a row of leafy greens with water.
If all goes well, the garden’s yield will include spinach, broccoli, zucchini, kale, tomato, bell peppers, lettuce and a variety of herbs. Greely hopes the first harvest will be ready to ship by the end of May.
Everything in the garden is organic, and Greeley turns to an organic farmer in Great Falls for guidance when needed. She decided on organic because it’s healthy, she doesn’t have to worry about chemicals and it “tastes better, of course,” she said.
Without the assistance of pesticides, the garden may need a little extra TLC. But Greeley is up to the challenge. “If I have to pluck off aphids by hand that’s what I’ll do,” she said.
Sacred Heart Parish in Manassas and Good Shepherd Parish and St. Martin de Porres Senior Center in Alexandria have similar programs, according to O’Dwyer.
Christ House and the Western Regional Office are working to provide healthier food for guests, and garden projects are a great way to help meet that goal, O’Dwyer said.
Greeley and O’Dwyer both hope that other parishes will start similar programs and share their gardening expertise with one another. Many parishes have plenty of available land and seasoned or would-be gardeners excited to help, said Greeley. 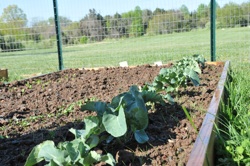 And people are eager for a way to make a difference — not just a donation — to the less fortunate, said O’Dwyer.
“It’s easy to go to the grocery store and get canned food to donate — not that that’s not a good thing — but to be able to work in a garden and share fresh foods with the needy is wonderful,” added McClain.
It also is a chance for parishioners to come together and build community by “literally getting their hands dirty together,” McClain said.
Fresh air, tasty veggies, better health and stronger community all are central to the project, said Greeley. But most importantly, “Christ told us to feed the poor, and that’s what we’re trying to do here.”
Photos taken by Katie Collins. Photo 1: Sandy Greeley, a parishioner of St. Veronica Parish in Chantilly who came up with the idea of a garden to feed the needy, places an assortment of herbs next to the garden. Photo 2: St. Veronica parishioner Michael Dorham, 11, pats soil around one of the vegetable plants in the new garden. Photo 3: Broccoli, radishes and spinach line one of four raised beds.