THE RURAL PARISH
The number of churches served by a rural pastor ranges from the traditional one parish to more than four. Two-thirds of pastors responding said they covered more than one rural parish. The number of families averaged around 500, but some pastors reported as few as 100 or less and a couple said more than 2,000 families in their pastoral area.

There was an even split between number of parish populations growing and those shrinking. An important determinant appeared to be proximity to larger towns or cities, which in effect meant access to more than farming or agricultural jobs for employment.
A significant reason for growth of several rural communities was the influx of Hispanic families. Reasons for shrinking populations include young people leaving and no young or new families moving in. Many remarked on fewer children seen in their parishes.
Whereas most of the parishes reported some farming or ranching as a typical livelihood, many reported other main livelihoods, such as manufacturing jobs, government or service jobs, small businesses and tourism.
CULTURAL AND ETHNIC TRENDS
When pastors indicated social or population changes in the parish or community (about one-third), it was mainly due to Hispanic families moving in. Otherwise, many rural parishes remain the same in racial and ethnic make-up. Interestingly,
those reporting a cultural or ethnic change in the parish also indicated that new people were readily assimilated into the parish. Despite language problems in some cases, most newcomers were accepted into the community.
For those reporting no change in the racial or ethnic make-up of the parish, there was a general sense that new people would not be readily assimilated. We can only speculate on why this might be. Perhaps in more rural, isolated areas, there is an anxiety about “new people” and change. 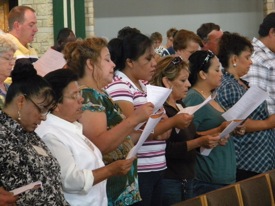 HISPANIC INFLUX
Increased immigration has dramatically altered the face of many rural communities. Immigration is a divisive issue, but the immediate reality is that rural communities are seeing ever-larger numbers of immigrants. Churches are one of the few welcoming
spots; local and state policies must be adopted to meet their needs.
Often overlooked in the heated public debate are the positive aspects of immigration. New businesses and strengthened communities often result from immigration. In the Midwest, some rural communities are seeing their first increase in population in decades. Tensions abound, but so do opportunities.
ECONOMIC IMPACTS AND DISRUPTIONS
Parishes are dependent on the economic health of their community, so it is not surprising to hear they are gravely affected when a large employer leaves the area and small businesses dry up. Pastors reported on the impacts caused by mills, mines and factories shutting down; a hospital shutting down; shops and other businesses moving to larger centers; and government offices relocating. If a factory or business suffers
a fire or an immigration raid, then many families are hurt.
Rural communities dependent on agriculture face the ongoing problem of bigger farm operations and fewer farm families.
As jobs move to larger population centers, high gas prices make it expensive to drive to distant jobs. The economy makes it hard for young people to stay; this in turn leads
to fewer young families and fewer children.
The more serious negative effects of a declining community are: suicides, alcohol-related deaths in car accidents, violence in schools, increased drug usage. Some report on the loneliness when no one is left in your age group.
One pastor reported on the “plight of our elderly people, who rely upon a meager income or pension” and gives him a good deal of concern. What is more, “the deaths of several key ‘pillars of society’ have caused a good deal of sadness,
but the people seem to be quite resilient and they pull together.”
ASSISTANCE FROM LAY LEADERS
By far, pastors indicated an equal or collaborative effort with parish members in making important decisions about the parish. For the most part, rural pastors are satisfied with the willingness or effort of lay leaders to assist in decision-making and parish management.
However, a related question asked if pastors were satisfied about the amount of time and talent that parishioners devoted to the parish. Responses indicated an “A” for effort, but “C” for capability. In many cases, there is a need to improve the leadership skills of parishioners.
As one pastor wrote: “Lay leadership is key to the success of any parish. While the sacramental presence of the priest is understood to be a necessity for the spiritual health of the community, lay leadership is understood to be necessary to the physical well-being of a parish.”
Given the multiple or clustered parishes for most rural pastors, lay leadership and volunteers are indispensable. They obviously know the parish from living there, “but there is always room for improvement and getting them to take initiative.” Pastors appreciated it when lay leaders went through a diocesan ministry formation program.
OPTIMISM VS. PESSIMISM FOR THE FUTURE
We were curious to know if people were generally optimistic or pessimistic about their future situation, including the future of their community and parish. Pastors indicated that parishioners generally felt optimistic about their personal or individual lives. These numbers fell a bit when asked if people felt optimistic about their community and their parish. Although the majority still remained optimistic, a sense of pessimism or anxiety seemed to be lurking in the background.
Why Pessimistic
When rural pastors reported deep pessimism among parishioners, it invariably came from the state of the local economy. There was no growth in the community – people were leaving and no one was moving in. Either there were no job openings or no opportunity beyond menial labor.
In the Midwest, the decrease in small farms always led to a decrease in the community and, needless to say, diminishing
number of parishioners. “We are a community of older people. Some are moving closer to city for medical facilities. Many funerals.” 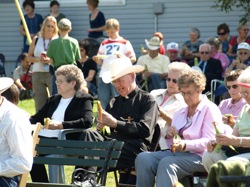 With the closing of main street shops and rural churches, parishioners become concerned about future mergers and losing their parish identity. Who will be their sacramental priest?
Why Optimistic
When the local economy is strong, the rural area grows, there is new housing and perhaps adding onto the school. Residents move forward with local projects; there is a sense of community and civic support. In some cases, the new industry comes with mixed blessings: a new casino or ethanol plant may bring jobs, but also bring social and environmental problems.
Nevertheless, industry and employment – or better crop prices for farming communities – lead to positive attitudes among parishioners. “We are building a new church building; parishioners are very excited about that.”
In the Balance
The following words from various pastors represent common themes about rural parishes around the country.
“We have sort of reached a status quo and people seem to be happy, generally speaking. The pessimism comes in because there is only one grocery store in the area. We do a lot of running around to get even basic things.”
“Most of the parishioners are pretty resilient and understand that change is almost a daily occurrence. Parishioners also realize that due to the lack of priestly vocations for various reasons, in order to survive the need for lay leadership is essential. The time and availability of the necessary leaders are both limited.”
“Our parish is in a county seat town; retail business is giving way to a larger neighboring community; still the people are proud of local tradition.”
“Optimistic, because farming & livestock prices are up. Pessimistic, because young people are leaving for the city.”
“Shrinking population leads to some pessimism; strength of our community gives us hope.”
“Overall, doing well and the people here like it. The economics are not always good for the young and so they would be the least optimistic and the greatest shrinking group while the elderly increase.”
“All of this is determined by culture and time in the parish. Immigrants are hopeful and long-time parishioners are grieving change.”