Tucked into the far southwest corner of Arizona, the city of Yuma holds a surprising and well-kept secret.  The city produces over 90 percent of the world’s lettuce during the winter months, and is rightfully titled, “the winter lettuce capitol of the world.”

But lettuce cannot cultivate and harvest itself.  Many hands are needed to sustain this industry and provide the United States with fresh produce every day.  Farm workers fulfill this crucial role and are largely responsible for supplying America with daily fruits and vegetables.
Often unseen and overlooked, farm workers live and work in the agriculture industry of every state of the country.  Although not all workers are documented, the U.S. Department of Agriculture still estimates that there are about 754,680 farm workers employed in the United States, with over 37 percent of them working in the Southwest. In the Yuma region alone, at least 50,000 farm workers are employed during the busy lettuce season. 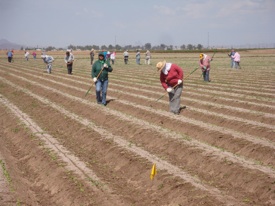 Despite the demand for jobs that the lettuce harvest provides in Yuma, it is not always easy for migrant workers to obtain safe and legal work.  In fact, a July 2011 USDA National Agriculture Workers Survey estimated that only about half of all farm workers are legally employed.
Visas
The H-2A visa system offers migrant laborers temporary entry into the United States to fulfill seasonal agricultural work, but due to its long and complicated process, both workers and employers are disinclined to use the visa program.  The H-2A system is a well-meant effort, but the reality of unfair wages and poor living conditions persist, calling for a new approach to aiding the migrant farm worker.
In order to accommodate the influx of migrant workers and provide them with jobs on farms, Catholic Relief Services and the Dioceses of Tucson and Mexicali launched a program called Manos Unidas (United Hands).  This program took quick strides by initiating a nonprofit organization called CITA (Centro Independiente de Trabajadores Agricoles, Independent Agricultural Workers Center).  CITA helps workers gain guest worker visas under the H-2A system and places them with employers.  CITA is trying to model just and legal farm labor that is beneficial to both workers and employers.
“Farm workers face many challenges relating to their consistently low incomes,” said Janine Duron, Executive Director of CITA. “It is rare for a farm worker to enjoy eligibility for health insurance. Disability insurance is unheard of for workers in one of the top three most dangerous jobs in the nation.” Through job placement and educational programs, CITA daily tries to address these challenges, and they are not alone their effort.
Diocesan Support
The Diocese of Tucson, Ariz., is also striving to offer farm workers ministry and support.
“Bishop Kicanas, his staff, parish members, and associates are very involved in the fight for dignity for working families,” Duron said.  “They sponsor and participate in forums [and] hold an annual prayer meeting in our Dia del Campesino (Farm Worker Appreciation Day) near Yuma, Ariz.” 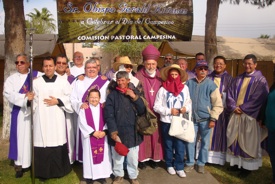 Emilio and Silvia Lopez, pastoral leaders in the diocese’s farm worker ministry, work closely with many farm laborers and have first-hand experience reaching out to the workers.
“The ministry of the diocese is to see the needs of agricultural workers (especially in evangelization and the sacraments) and ensure their welfare,” Silvia said.  The Pastoral Campesina Ministry, conducted through various workshops, is truly responding to a need in the Tucson area.
“The diocese saw the need to develop leaders [among farmworkers], so that they themselves might provide for the needs of the farmers,” Silvia said.
She also reflected on the difficulty agricultural workers have assimilating to the pastoral care that the diocese offers.
“[This ministry] is an area in the Church that they have not experienced and it is new and surprising for the agricultural worker, but we have had a favorable response,” she said.  “You need to be in more connection with them in a straightforward manner.”
Another difficulty for the ministry is to practically and effectively make the ministry accessible to farm workers.  “The strongest challenge is…to continue offering a comprehensive education (spiritually, morally, and socially) to [farm workers], their families, and their communities,” Silvia said.
Despite the challenges, the Campesina Ministry undoubtedly benefits these migrant workers whose service to the American food system is extremely important.
Ultimately, the collaborative work of the various programs, Manos Unidas, CITA, and the Campesina Ministry, is making valuable strides towards enriching the lives of both farm workers and their employers.   Duron humbly recognizes the reciprocal blessing of her efforts.
“We work with and for the loveliest people and our hearts continue to be motivated by them and the good employers who love and appreciate them as well,” she said.
*This article originally appeared in the Spring 2012 issue of Catholic Rural Life.