The National Catholic Rural Life Conference  (NCRLC) is pleased to announce Most Reverend Paul D. Etienne, Bishop of the Diocese of Cheyenne, Wyo., as its new board president.

Bishop Etienne was elected during NCRLC’s board of directors meeting, held June 4-5, 2013, in St. Paul, Minn. Bishop Etienne succeeds former president Bishop Frank Dewane of the Diocese of Venice, Fla. Bishop Dewane stepped down as president following the end of his six-year term. 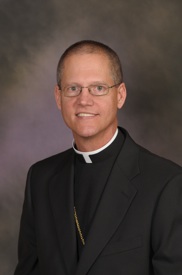 Bishop Etienne grew up in a rural community in Indiana and was ordained a priest on June 27, 1992, for the Archdiocese of Indianapolis. He is the Eighth Bishop of the Diocese of Cheyenne.
Established in 1887, the Diocese of Cheyenne is home to over 53,000 Catholics. It has 36 parishes and 36 missions. There are 52 active priests, 17 retired priests, 22 deacons, and 15 sisters.
“Since receiving the invitation to join the board, I have been familiarizing myself with the mission of the National Catholic Rural Life Conference,” Bishop Etienne said. “Our desire is to strengthen the Catholic faith in the rural areas of our Church. Our Catholic Church has a long tradition of teaching, preaching and catechizing. The desire of the NCRLC is to make the teachings better known and to make practical application in the food and agriculture industry.”
Bishop Etienne will remain president of the board for three years, upon which he will be up for re-election. NCRLC Board of Directors may serve a maximum of two consecutive three-year terms.
“NCRLC is blessed to have Bishop Etienne as its new president,” said James Ennis, NCRLC Executive Director. “His leadership gifts and love of rural life are evident and will serve NCRLC well as the organization seeks to renew Catholic faith in rural America through lay leadership development, education and advocacy programs. I also want to acknowledge the good work of Bishop Frank Dewane over the past six years. He led the organization through a strategic planning process that has helped position the organization for growth and service.”

I would like to share this data with NCRLC in order to look at the shifts that are taking place within rural populations. But to also take a close look at who is coming to rural communities and who for the most part are Catholics. They are the Hispanic population who is increasing the rural counties of the Midwest and Western States. It is a population who needs both civic and spiritual guide dense that Catholics have learned through experience and training. I hope that they can learn to impart this knowledge to there new brethren. Juan
Economic Research Service United States Department of Agriculture
Geography of nonmetro population change is shifting

Opportunities for population growth and economic expansion vary widely from one nonmetro county to another, and new regional patterns of growth and decline have emerged in recent years. Spurred by an energy boom, large sections of the northern Great Plains turned around decades of population decline. Population growth slowed considerably in the Mountain West for the first time in decades, affecting numerous counties in western Colorado and Wyoming, central Oregon, northern Idaho, and elsewhere. At the same time, non-metro population growth switched to decline in 21 Eastern States between 2004-06 and 2010-12. For example, most metro counties in Florida maintained above-average population growth through the recent housing crisis and recession, but nonmetro areas there went from 3-percent growth during 2004-06 to a -0.44-percent decline in the past 2 years. This map is found in the May 2013 issue of Amber Waves magazine.