The classic image of farm worker ministry can be experienced in the celebration of Mass in the fields with workers and their families gathered around a table decorated with images of Christ and the Virgin. There are flowers and candles. Sometimes the campesinos prepare the space as though it was an outdoor cathedral. There tends to be a solemnity based on the gratitude of the people that they are blessed with the presence of Christ in their midst. 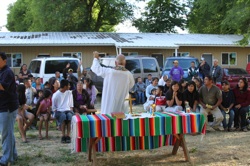 More often people gather without the presence of a priest for prayer, bible study or a gathering to speak of human and religious issues in the lives of the people. Those who work in Campesino Ministry need to develop an appreciation of the faith and devotion of the farm worker. It is a faith that comes from the heart, el corazón. It is a faith nurtured by oral history and traditions developed in families and communities, often without presence of a priest. It is a faith that not only survived but thrived in times of persecution. The faith was nurtured by popular devotions, family practices, pilgrimages, recitation of rosaries, Stations of the Cross and the celebration of local feasts.
A catechist was teaching a group of Confirmation students about Mary, the Mother of Jesus, and started asking students about Juan Diego and Our Lady of Guadalupe. They struggled to tell the story. The catechist observed, “They have medals of la Virgen. She decorates their cars, some have tattoos of la Virgen, but they do not know the story.”
¡Que viva la Virgen!
Our Lady of Guadalupe, for the Mexican is more than simply the Virgin Mary. While she is identified as Mary, the Mother of God, the story of Juan Diego and Our Lady of Guadalupe is wrapped up in the identity of the Mexican. Juan Diego is the model of striving to do the will of the Virgin. At the canonization of St. Juan Diego, Pope John Paul II declared, “Guadalupe and Juan Diego are a model of perfectly inculturated evangelization.” (Pope John Paul II, July 31, 2001)
The story sets the stage for a religious heritage of faith that brought together people from two worlds, the indigenous and the Spanish. “In accepting the Christian message without forgoing his indigenous identity, Juan Diego discovered the profound truth of the new humanity, in which all are called to be children of God. Thus he facilitated the fruitful meeting of two worlds and became the catalyst for the new Mexican identity, closely united to Our Lady of Guadalupe, whose mestizo face expresses her spiritual motherhood which embraces all Mexicans.” (Pope John Paul II, July 31, 2001)
The people sing, “Desde entonces para el Mexicano, ser guadalupano es algo esencial”. (From this day forward for the Mexican, to be Guadalupano is essential). The attachment to Our Lady of Guadalupe and many customs of their home villages identifies the campesino with the Catholic faith. For the person of faith, to deny the Virgin is to deny being Mexican.
Celebrate the faith of the Campesino 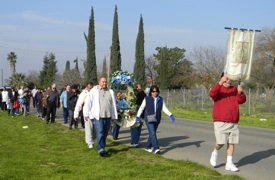 We must avoid making a harsh judgment on the faith of the Campesino. Too often our farm workers face many challenges to regular attendance at Sunday Masses and participation in religious education programs. Be careful not to misjudge an inability to explain or answer questions of the Catholic faith as ignorance of the faith. Many of our farm workers have received very little catechesis, but their faith comes from religious practices and prayers of their home community. While unable to articulate their beliefs, they have a profound belief in God, the Virgin and her son and an identity with the Catholic Church.
It concerns me to hear someone say, “They are only culturally Catholic.” This can denigrate the profound trust and confidence that people have in the presence of God in their lives. In the United States there is a tendency to reflect on the Church in theology, morality and sacrament, while in Latin America, the Church focuses on a loving relationship with Christ and the Virgin Mother. Crossing cultures we can learn so much from one another.
Joyful faith
The Latino faith is filled with joy, hope and fiesta. Celebration of prayer and sharing of faith is often accompanied by food and celebration. When a community gathers to pray the rosary or celebrate a Posada or a bible study there is always the “convivencia”. Particularly when people are celebrating feasts of the Virgin or another saint, the food is more elaborate.
In the diocese of Fresno there are some isolated communities without a Catholic Church. In one such town I have been celebrating Mass once a month in a community center. After two monthly Masses the protestant pastor in the town said, “Brother Mike, I am happy that you are celebrating Mass for your people, but I want you to know there is only one house of God here and it is my little church. It would be a privilege and an honor if you would say your Mass in my church.” It was a great welcome and we held Mass in October in his church, but the people wanted “convivencia” (refreshments) after Mass and there was no place for that in that little chapel. We went back to the community center because Mass isn’t enough without tamales or posole.
“Your blessing, Father.”
It is common for the Latino to ask the priest for a blessing. They come for blessings of religious articles, cars, houses, children and those who are ill. These blessings represent the desire of the person to feel close to God. Such blessings can appear on the edge of superstition or even a sense of magic. A priest would like to take more time to explain a blessing or prayer, but we can be overwhelmed by the number of people asking for the blessing after Masses.
Many approach the priest for a blessing, while they do not receive the Eucharist at Mass. Some have never been catechized and have not received the First Eucharist. Others feel unworthy because of irregular attendance at Sunday Mass. Others are in irregular marriages. Yet we need to be generous in blessing the poor amongst us. That means being patient with those asking for a variety of blessings that may make us uncomfortable. Whenever possible, I try to explain a blessing, if it be of religious articles or of a house or a car, but sometimes it may not be opportune to take a lot of time for an explanation. At all times bless them and assure them of God’s love.
Next month’s reflection: Cultivating faith like cultivating a crop
Fr. Mike McAndrew is the Director of Campesino Ministry for the Diocese of Fresno, Calif.
Click HERE to read more commentaries by Fr. Mike McAndrew.

Beloved in the Lord and co-worker in Christ.
My Name is Pastor Nathan sifuna of Good hope life ministry based
in Moi’s Bridge town, Kenya-East Africa. with a feeling of great
thanks giving to you for all the good work you are doing around the
globe in the serving of the Lord and the Body of Christ. First and
foremost I give all the Glory and Honour to our Heavenly Father for His
great grace and love for all of us. Secondly, it is my desire and my
request to you as a servant of God if you may have a visit to our
continent and possible to our country Kenya and Minister to God’s
People here by reaching to the lost. It is my prayer that we should
have partnership in the work of serving God in this continent of
Africa. Especially in E. Africa. Read Romans 15:7, 1peter 4:8-11. God
Bless you so much.
Your Brother in the Lord
Pastor Nathan Sifuna