Several articles have recently appeared in newspapers across the country including the New York Times and Wall Street Journal devoted to the topic of renewable energy—power derived from sources such as the sun, wind, water, and biomass (which includes ethanol and biodiesel). The 2011 crisis at a Japanese nuclear plant, and rising oil and gas prices are further fueling the debate about how to increase production of renewable energy and decrease the United States’ dependence on foreign oil. At the same time, the government is concerned about providing affordable energy to all communities.  National Catholic Rural Life Conference (NCRLC) has been closely following the developments in renewable energy for many years, since there is much at stake in rural communities both in the U.S. and internationally. 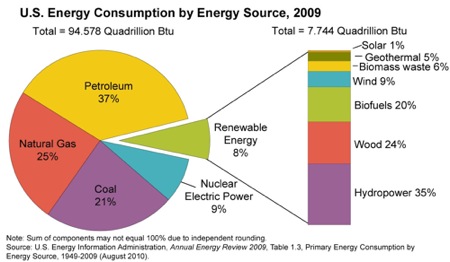 In 2009 renewable energy contributed approximately 8 percent (see chart) of the total U.S. energy consumed.1 Sources of renewable energy include hydropower (35 percent), wood (24 percent), biofuels (20 percent), wind (9 percent), biomass (6 percent), geothermal (5 percent), and solar (1 percent). A majority of renewable energy (53 percent) goes to producing electricity, while more than a quarter (26 percent) is consumed by industry for industrial applications such as making paper. The U.S. Department of Energy in its Annual Energy Outlook 2011, projects consumption of renewable fuels contributing 13 percent of the total energy consumed in the U.S. by 2035.2  The growth and expansion of the renewable fuels is expected to positively impact rural communities. The combination of increased demand for biofuels and biomass products, the building of new refineries, wind turbines and other related manufacturing facilities in rural areas, will help strengthen rural economies. For example, a new biomass refinery employs on average approximately 50 skilled people,3 not including many additional ancillary jobs.
But along with this projected growth in renewable energy, there are increasing questions and concerns about the effects on the environment.  For example what are the impacts to soil, water and natural landscapes? How do we exercise a “responsible stewardship over nature,” conserving natural resources, while at the same time enjoying the fruits and cultivating the earth in new ways to accommodate the needs of our community? How do we care for the land in such a way as to “pass on to our children’s children and generations after them a land richer than was entrusted to us?”
Pope Benedict also presciently identified energy resources as a global problem in which there is a “pressing moral need for renewed solidarity, especially in relationship between developing countries and those of that are highly industrialized. The technologically advanced societies can and must lower their domestic energy consumption, either through an evolution in manufacturing methods or through great ecological sensitivity among their citizens.”4  In the Spring 2011 issue of Catholic Rural Life, NCRLC looks carefully at the many dimensions of these questions, both the technical and the moral. We invite you to participate in this conversation by reading through the articles and responding here on our website. May God give us wisdom to be good stewards of the earth’s resources.
To find out more about renewable energy from a Catholic viewpoint, check out our Spring 2011 Catholic Rural Life Magazine.
1Annual Energy Outlook, 2011, U.S. Energy Information Administration
2Ibid
3Interview with Chris J. Zygarlicke, Energy & Environment Research Center, March 2011.
4Caritas in Veritate, paragraph 49, Pope Benedict XVI, June 29, 2009