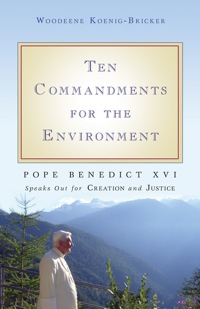 Ten Commandments for the Environment. By WOODENE KOENIG-BRICKER. Notre Dame, IN: Ave Maria Press, 2009. Pp. 144.
As a service to NCRLC readers, I thought it might be helpful to offer occasional reviews of “small” books on “big” ideas, that is, relatively easy reads that nonetheless contribute to the conversation on all things Catholic and stewardship in important ways. It can be daunting to venture into complex issues of Catholic social thought, and given our busy lives and the virtually infinite number of resources, we often quickly feel overwhelmed. My hope here is to develop a list of books you might be inclined to buy yourself, share with a friend, or put on the shelf in the parish resource library.

I’ve already mentioned Marie George’s Stewardship of Creation: What Every Catholic Should Know, in a previous essay. Koenig-Bricker’s brief volume would serve as an excellent complement. Together these two works would form a solid basis for conversations among parishioners, students and others about Catholic principles to guide our common discernment.
The Ten Commandments of the title here are not variations on the classic ten given on Sinai by God, and there is no suggestion that they are meant to replace them. There are, instead, principles issued by the Pontifical Council of Justice and Peace meant to “explain in ten points the most important aspects of the chapter on the environment in the Compendium of Social Doctrine of the Church.” (10) Here’s an immediate pastoral vantage for the local tutor seeking to gather a reading group on environmental concerns. If you want them to bring a bible, have access to the Catechism, as well as the Compendium, they’re likely to soon be requesting curb assistance or ask for some kind of e-book reader. Either option is likely to break the budget. Ten Commandments is a more modest and effective solution.
But by far the real strength of this work is its ability to situate each of the ten principles within the broader context of the Church. In brief chapters of often a dozen pages in length or less, Koenig-Bricker does an excellent job leading the reader to some of the deeper threads that form the fabric of Catholic social thought. Any one of the chapters could serve as a prompt for an evening’s conversation. Obviously, they would simply be “prompts” but my experience tells me that very few are really equipped to venture into the subtle waters of environmental stewardship from a genuinely Catholic perspective. It is not simply a matter of a recycling bin here and there, or an occasional purchase of something organic; Catholic stewardship emerges from our deepest convictions about God, the world, our lives. It is about the fundamental stance we take toward reality. Creation is either a gift of God or it is not; and I love the Lord with all my heart and strength in this cosmos he has given us, or I don’t. It doesn’t get much deeper than that.
“Situates within the context of the Church,” captures something of this volume. More accurately, it situates the issue of stewardship in the heart of Benedict’s papacy. The press has dubbed the Holy Father the “green Pope,” positively regarding his decisions for such things as the installation of solar panels and reforestation projects. We should be grateful that this aspect has been recognized and affirmed by the broader media.
But Koenig-Bricker’s work should convince readers that such emphases from the media are trivial, or at least trendy, in comparison to the genuine intellectual influence Pope Benedict is exercising at regular intervals in his papacy. In other words, the most significant impress made by Ten Commandments is the fact that the Holy Father has repeatedly commented on the question of environmental stewardship on virtually hundreds of occasions. Unless you happen to be one of those “papa-razzi” who get regular electronic feeds on everything the Holy Father is doing, one is likely to miss the many, many occasions in which the subject of the environment is mentioned. The overall impress of the nearly one-hundred references made to the issue is to convince the reader that this is not a passing interest of the pontificate.
Catholics interested in developing a working grasp of the overall issues of stewardship would be well served in this brief volume. Those, too, seeking to be led to the ever more deeper questions of theology, creation and the place of the human person would also come away satisfied because enlightened.
It would make a welcomed addition to the parish resources.
Dr. Christopher Thompson is a NCRLC board member and the academic dean at St. Paul Seminary School of Divinity in St. Paul, Minn. He teaches moral theology to seminarians and lay students at the University of St. Thomas and has written on moral theology, psychology, marriage and family, and the importance of the environment, with particular interest in the thought of St. Thomas Aquinas.
More of Dr. Thompson’s commentaries can be found HERE.