As we approach the month of December, we enter a very special time for the faith of people from Latin America. The month begins with feasts of Mary, the Mother of God in the feast of Immaculate Conception and Our Lady of Guadalupe. The month continues with Posadas, preparing the way for the Birth of Jesus and then the celebration of Christ’s birth. As weather limits the amount of time farm workers may work in the fields, December is a time to celebrate faith deeply imbedded in cultural celebrations of these events.
St. Juan Diego, Model for Migrants

At the canonization of St. Juan Diego, Pope John Paul II called Juan Diego the “model of the new evangelization.” Unfortunately most people, including many Mexicans, only know the basic points of the story. When one studies the “Nican Mopohua” and reflects on the story as one reads and meditates on Sacred Scripture, one can understand him as a model for evangelization today. Many themes may be found in the “Nican Mopohua,” the original account of the story of the apparitions written in Nahuatl, the Aztec dialect. I wish to only expand on one, so needed for the poor, particularly the migrant.
Loss of Human Dignity
The context of the story of St. Juan Diego begins in the account of the Nican Mopohua, the first accounting of the story written in the Aztec language, Nahuatl. The story begins ten years after the conquest. The Aztec nation had been conquered, their land taken away, their temples destroyed, their weapons destroyed. They were utterly defeated and they had become the servants of their conquerors. A once noble Aztec man enters the scene. He had accepted the religion of his conquerors. He was baptized, Juan Diego. He was on his way to attend Mass and to learn more of his new faith. He walked through the hills of Tepeyac when he heard the birds singing and thought about the “good old days.” He asked, “Am I in the heavenly land of my ancestors?” For a moment he forgot the devastation that had taken place in his land.
Today we have migrants entering this country because of a variety of hardships in their native lands. The customs of this country are different than the people of desperation know in their native countries. They are unfamiliar not only with the religiosity of the United States, they are unfamiliar with practices of their own Catholic Church here. Self esteem is challenged at all levels in both the social and religious world. The migrant can identify with the nostalgia of Juan Diego and the humiliation that he endured.
Human dignity: the reward of faith
Then he heard a woman’s voice saying, “Juantzin, Juan Diegotzin.” She called him, “My noble Juan, my dignified Juan 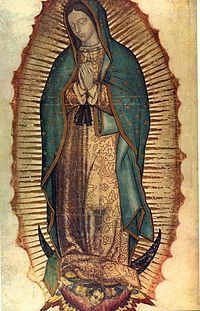 Diego.” He looked and saw a woman clothed in the sun. Her greeting filled him with a sense of awe. He was called by his Christian name. She identified herself as “Maria, the mother of the one true God.” She elevated and restored his sense of dignity and worth. She had a mission for him, to go to the Bishop and ask that a small chapel be built for her on the spot where she appeared. He left her with confidence that the Bishop would listen to her plea.
Awareness of human dignity can be very fragile as seen in Juan Diego. At the home of the bishop, Juan Diego fell to his knees and told the bishop of the woman and her message to build a small chapel for her on the spot of the apparition. He interpreted the bishop’s response as a personal failure. When he went to the Virgin, he said that he was nothing and no one; she should send someone else who would be respected. Once again the Virgin elevated his dignity by saying that she could send someone powerful and influential, but it was he alone whom she called and would accomplish her will through him. By the end of the story, Juan Diego stood before the bishop with the image of the Virgin on his cloak and it was the bishop on his knees giving homage.
The restoration of his own sense of dignity was directly tied to confident trust in God through the intercession of the Mother of God. It was not gained through a theological presentation of the doctrines of the Church, but through the experience of being respected by one representing the faith, the Lady clothed in the sun. The model of how Juan Diego discovered his faith was directly tied to believing that he was worthy and loved by God. Campesino ministry must reflect the genuine love of the Church for the poor.
Respect for the Migrant is countercultural in the U.S. today
The first reading for the Sunday Liturgy of Oct. 23 was in stark contrast to both the actions taken recently in enforcement of the broken system of immigration in this country and the rhetoric of politicians on the issues of immigration. “You shall not molest or oppress an alien, for you were once aliens yourselves….If you ever wrong them and they cry out to me, I will surely hear their cry.” (Exodus 22:20,22)
It is discouraging considering the harsh policies, the enforcement and the rhetoric of politics on migrants and immigrants in this country. The United States Conference of Catholic Bishops has steadily called for reform of the immigration system in this country. The politics at this time is either stagnant or becoming worse. Our call is to evangelize and to continue to proclaim not only the Gospel, but the Old Testament view of treating the stranger with respect and dignity.
In the feasts of Mary Immaculate, Our Lady of Guadalupe and the Birth of the Savior, let us support the faith and hope of the migrant worker in this country. St. Juan Diego stood before the bishop, a man between two cultures standing for the dignity of the poor. Today our workers in the fields deserve better from society and from our Church.
Fr. Mike McAndrew is the Director of Campesino Ministry for the Diocese of Fresno, CA.