Cardinal Dolan: As the Countryside Goes, so Goes the Church

Cardinal Dolan: As the Countryside Goes, so Goes the Church

A Q&A with the Archbishop of New York 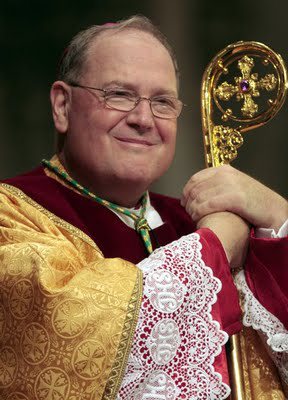 Today, CARDINAL Timothy M. DOLAN is the shepherd of the most urban diocese in the country: the Archdiocese of New York. But the Missouri native has strong ties to America’s heartland, first cutting his teeth as a bishop in the dioceses of St. Louis and Milwaukee. He also has a very special connection to Archbishop Edwin V. O’Hara, the founder of Catholic Rural Life, and wrote a biography on the archbishop when he was a doctoral student at the Catholic University of America.

Cardinal Dolan considers Archbishop O’Hara a personal hero, and recently shared his thoughts on Catholic Rural Life, its mission, and the man who founded it.

TCD: It sort of came to me. John J. Sullivan, the bishop of the home diocese of Kansas City-St. Joseph, had written to the Department of American Catholic History at the Catholic University of America to request the creation of a scholarly biography on Archbishop O’Hara, who had actually been the diocesan bishop from 1939 to his death in 1956. I was a graduate student at CUA at the time and told Msgr. Robert Trisco, the chair of the department, that I was up for the task, and he assigned it to me. Was it ever a blessing! It was a topic that was given to me, but I did rejoice in it because Archbishop O’Hara was a man of immense impact. I spent three serious years studying and writing about his life, which the university eventually published as a book. That experience has had a very profound impact on my life.

TCD: He was so passionate about the rural life, I think for two reasons. First of all, he grew up on a farm and loved farm life. As I wrote in the biography, he was a classic example of what Thomas Jefferson saw as the backbone of American greatness: the sturdy yeomanry of the farmers and their families on the land. Jefferson thought that if we were a nation of farmers, or a nation that at least highly regarded the farming vocation (he always used the word “vocation” for farming, not just a “job” or “occupation”), we would be strong. And Archbishop O’Hara agreed. His own memories of growing up on a farm in Lanesboro, Minnesota, were very sustaining. So there’s number one, his own personal experience and his own belief in the health and holiness of agrarian life, rural life.

Number two, he was a shrewd pastor. He was ordained in St. Paul, but was permitted to serve in the Archdiocese of Portland, Oregon, and he began to see that it’s the Catholic families in the farmland, in the countryside, in the rural areas that are strong in their faith and have solid, loving, faithful families. He recognized that these rural families gave the Church a number of vocations, many who would become evangelizers in the city. So Archbishop O’Hara said, “The Church that neglects the countryside is suicidal, because if you don’t take care of the Church in the small towns of America, pretty soon your cities are going to shrivel up too, because most of their Catholics come from the country.”

He was a great advocate for rural Catholic communities. He would ask why rural folk didn’t have the same access to Catholic schools, ministry, social programs, and health care that their counterparts in the city did. He wanted to see the Church just as concerned with the life of the farmer, who faces amazing difficulties, as it was with the life of the immigrant in the city. So Archbishop O’Hara pushed for Catholic programs that were common in cities, like credit unions, health clinics, and family programming, to be started in the countryside. He believed that  caring for Catholics in rural areas is not only demanded by principles of social justice, but it is also vital for the health of the Church, because Catholic ministries and parishes in the city would be in great peril if the countryside was neglected.

CRL: As a former president of the U.S. Conference of Catholic Bishops, you have a unique perspective on the Church in America. Why is rural life important to the Church today?

TCD: First of all, any person is important in the life of the Church, any single soul. We’re interested in people; where they live is secondary. There’s the basic answer. But rural areas deserve special attention, because in these places you find the strongest families and people who take their faith very seriously. There’s a rhythm of life that is conducive to spiritual vitality in the heartland and in the countryside. So if we’re going to be serious about evangelization, we have to strengthen what we have there, because most of our evangelizers come from there.

I knew that when I was rector of a seminary. When I would look at the number of young men that would come to the North American College in Rome as new seminarians, four years away from priesthood, it wasn’t at all surprising to me to see that a good chunk of them came from rural places. They came from the villages, they came from the small towns. You’ll notice, too, that in the history of the Catholic Church in the United States, most of the great movements and revivals start in the Midwestern countryside, whether it was the liturgical movement that came from the rural areas, whether it was the catechetical movement, whether it was a social justice movement with people like Virgil Michel, who gave us a theology of what social justice was all about. All these great movements that revitalized the Catholic Church in the United States didn’t start here in New York. I wish they did; I wish I could brag about it. But most of the wisdom and genius of the Catholic Church of the United States came from the people in the small dioceses of the farmlands of America. So, if any bishop is worth his salt and wants to be concerned about both the present and the future of his diocese, he’s going to make sure that the needs of the small-town Catholics, the farmers, are a priority for him.

TCD: I’ll tell you, and I think most bishops and priests would nod their heads in agreement: you love when you’re leaving the city and when you’re going out to the countryside. Now, I don’t know if I would go so far as Vincent Wehrle, the first bishop of the Diocese of Bismarck, who was an early leader in Catholic rural life and said, “Cities kill.” But there’s something sacramental about country life. I try every weekend, either Saturday or Sunday afternoon, to get to one of the parishes in the countryside and I relish it. There’s something fresh about it, there’s something friendly about it, there’s something welcoming, there’s something embracing. Archbishop O’Hara was right when he observed that in a rural parish you don’t have to explain the Easter Vigil to parishioners; because they’re farmers and outdoor folks, they know what winter turning into spring means and signifies. They know what life means, because they have to go home and help birth some calves. So there’s a natural alliance between the rural life and the Catholic faith. Archbishop O’Hara also said that rural people know that morality is important because they know that you have to be very disciplined, responsible, reliable, and virtuous if you’re going to have a productive farm. And that “natural alliance” was evident when I was in St. Louis, when I was in Milwaukee, and now as I’m here in New York. We have to make sure that we’re always just as vigilant about pastoral life in the countryside as we are in the city.

I remember once when I was bishop in Milwaukee I was out in a little country parish, and it was the Feast of Corpus Christi. We were processing with Jesus in the Blessed Sacrament through the fields. All of a sudden, three cows came up right next to me as I’m walking by with the Eucharist. The people didn’t think anything of it. The pastor whispered to me, “Even these cows sense the divine is here, in the Eucharist.” And I thought, “This is so natural; it’s so good.” A farmer would not find it weird at all to think that the only begotten Son of God was born in a stable with animals. For him it would have been an affirmation of what agrarian life is all about. There’s something sacramental about rural life.

CRL: Catholic Rural Life is launching its first ever capital campaign.  It’s called Sowing Seeds: A Campaign to Renew Catholic Faith in Rural America. As the campaign’s honorary chair, why do you think it’s important for yourself and others to participate and support Catholic Rural Life in this endeavor?

TCD: First of all, it’s a question of justice. We owe it to our people on the land. Our Catholic farmers, our Catholic people in small-town America, on the ranches and plains, and in the meadows and the valleys of the United States. They love their faith and they’ve been loyal to their Church. There are generations of them who have put family, faith, and farm as the priorities of their life. And we owe them love. We owe them support. We can’t turn our back on them. We can’t let them think the Church has forgotten them.

Secondly, it’s a question of prudence. As my hero Archbishop O’Hara would say, “The Church that neglects the countryside, their future is in doubt.” Why? Because that’s where the vitality of the faith is. That’s where vocations come from. That’s where our future evangelizers who bring their faith to the cities and the suburbs come from. This is a natural pool of committed, genuine, virtuous people who love family and virtue and freedom and their faith, and they bring that to wherever they go. They might leave the farm to go to college, to move to the city, but they bring those values with them. High on the list of those values would be their Catholic faith.

I live in the Diocese of Amarillo, and I wish I could be as sanguine about the future and possibility of the rural diocese. My wife and I decided to return to the Texas Panhandle, to raise our children on a small farm, to raise as much of our own food as possible. All well and good. But we left the vibrant liturgical and devotional life of a DC parish for an aging rural parish, served by a foreign-born priest with no experience in or love for the countryside. The liturgical life of the diocese is the very inverse of the liturgical movement spearheaded by Virgil Michel. No Rogation, no Ember days! The same dreary music to be found in nearly every parish in the United States, rural and urban alike. No vocations. Few Catholic schools. No opportunities for adult religious education. The prospects are not happy for those of us schooled in the centers of reform and renewal to be found on the East Coast, in the Ordinariate and the many parishes now celebrating the Extraordinary Form. To return to rural Catholic America is to come back to a land slowly dying, with the same weary and decades-old slogans meant to convince the dwindling faithful that all is well, all is well.