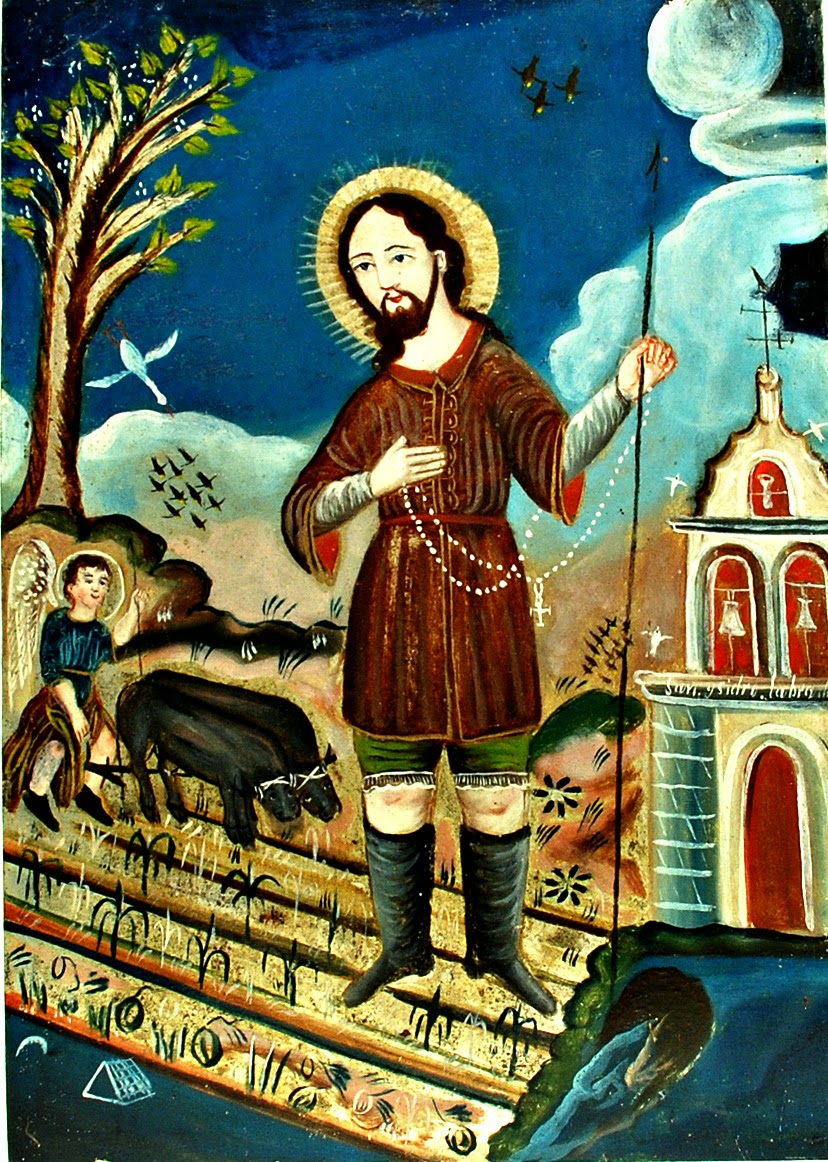 All you really need to know about St. Isidore the farmer (or “the laborer”) is that in the town of Pulilan in the Philippines, parishioners of San Isidro Labrador make their water buffalos kneel before a statue of the saint. This is a fitting veneration for a saint who was often accompanied by a team of heavenly oxen driven by angels. St. Isidore is known as the patron saint of farmers and laborers but he isn’t some morality tale on the benefits of hard work. In fact, Isidore spent so much time praying instead of working that he’s hardly a model of an employer’s ideal worker.

Born to a poor family in Madrid in 1070 AD, St. Isidore lived his entire life as a hired hand for a wealthy landowner, Juan de Vargas. Despite his poverty, Isidore was well known for his charity to the poor. His wife, St. Maria Torribia, always kept a pot of stew over the fire because of Isidore’s habit of bringing home beggars to dinner. He was also known for his devotion to his faith, praying often and attending mass daily before going out to the fields. Stories of miracles followed St. Isidore throughout his life and after his death.

Isidore was canonized in 1622 along with Ignatius of Loyola, Teresa of Avila, Francis Xavier, and Philip Neri. Neither a scholar nor a religious, Isidore stands out from these other Spanish saints. St. Isidore is a kind of “everyman’s saint,” serving as a model for those of us who find ourselves behind a plow or desk and not an altar. He shows us that all of us can and should aspire to sainthood.

We might be tempted to see St. Isidore as the patron saint of hard work, the Catholic idealization of the Protestant work ethic. But Isidore’s virtue was not in his zeal for manual labor. Actually, in many ways, he wasn’t a very good worker. His daily trips to morning mass often caused him to be late to his fields. Once he did finally make it to work, he often stopped his labors to take up prayer. He also poured out valuable grain for wild birds and gave food to beggars.

While these qualities would make Isidore an undesirable worker, they made him a very good Catholic. And it was for these qualities, not his hard work, that he was rewarded. One of Isidore’s fellow farmhands, who didn’t share the saint’s habit of attending daily mass, became angry at Isidore’s occasional tardiness and informed their master of the offense. When the master came out to the fields the next day to learn the truth, he found that Isidore was indeed absent. But he didn’t find his plow idle. Angels had taken up the task to ensure the work got done.

Interestingly, God didn’t send these angels to work the plow for Isidore as a reward for his exceptional dedication to his work. On the contrary, they joined Isidore because the saint was exceptionally dedicated to prayer and the sacraments. Similarly, St. Isidore was not rewarded for thriftiness. Although poor himself, the saint gave freely to the poor, sometimes past his means. But when Isidore dumped out grain for hungry wild birds, the grain bag miraculously refilled. When Isidore brought home a house full of beggars, his wife’s stew pot never emptied. The miracles that accompanied St. Isidore were not the results of unceasing diligence at work or frugality in the home. Instead, it was his devotion to God and charity to neighbors that brought about the miraculous events.

There is certainly something to be said for hard work and good stewardship of wealth. But, from the Catholic perspective, there is a great deal more to be said for charity and spiritual devotion. In St. Isidore, we see that God values these virtues even in poor laborers; so much so that he will perform miracles for the sake of a hired hand’s daily mass attendance.

One reason this may seem so odd to us in our culture is that it’s easy to think of our occupations as our “real” work and our spiritual lives as a helpful, secondary kind of labor. Prayer may be a good thing, we think, but our jobs are the necessary things we do for money. We may even think of those with priestly or religious vocations as those who perform spiritual work for a living while the rest of us go about making money to support this work.

I’ve fallen into this way of thinking before and used it to justify neglecting spiritual exercises. But, in St. Isidore, we see that our spiritual work ought to come first. We see that the Lord eagerly wishes to meet with us in prayer and the sacraments and will take care of our other work if we make time for him. If I’m late to my office because of morning mass, it’s unlikely a pair of oxen will show up at my desk. But I am convinced that we will be blessed for placing our real work first.

Daniel Stewart lives and farms in Waco, Texas.  He writes more about St. Isidore in the upcoming issue of Catholic Rural Life Magazine, which comes free with a membership.

This piece was first published in Catholic Exchange on May 15, 2014.  It is reprinted with permission.