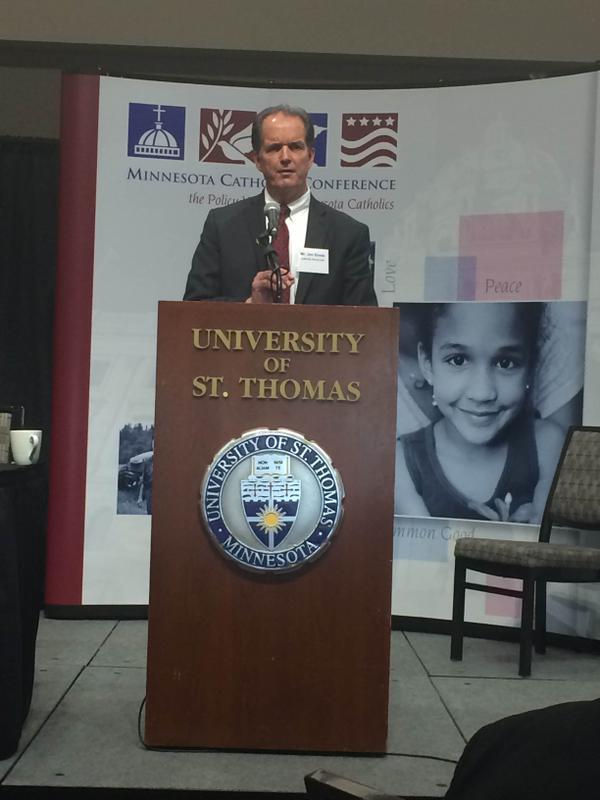 Jim Ennis, executive director of Catholic Rural Life, provided the following introductory remarks to a panel discussion on Laudato Si and its implications that was held at the University of St. Thomas on September 9, 2015.

Some of you may be wondering why Catholic Rural Life is co-sponsoring an event like this one. There are at least 2 reasons:

Now a little about Laudato Si.

If all you read or listened to about this encyclical came from the newspaper or the television or the radio, you would think this is a letter strictly about climate change. Yes, climate change is prominent, but it is Much More than a Letter Simply about Climate Change

Catholic Rural Life is a national organization, so let’s take a macro view of what is happening in the United States? What are our environmental challenges?

Water contamination is one great challenge. We all need water to live.

From upstate New York to the plains of the Midwest, from the vegetable fields of New Mexico and Arizona, to the fertile San Joaquin Valley in California, concerns about water quality are being raised in research centers and state legislatures all over this country. For example, in a 2012 University of California Davis study of ground water contamination in the San Joaquin and Salinas Valleys located in Central California, two of the most productive agricultural areas in the country, researchers concluded: “…nitrate contamination is widespread and increasing. Nitrate contamination poses an environmental health risk because many rural areas obtain drinking water from wells that are often shallow and vulnerable to contamination. Infants who drink water containing nitrate in excess of the maximum contaminant level (MCL) for drinking water may quickly become seriously ill and, if untreated, may die because high nitrate levels can decrease the capacity of an infant’s blood to carry oxygen.”[4] Approximately 2.6 million people living in these two valleys rely on groundwater for drinking water. Some of the highest levels of nitrates were found in wells located in rural communities, many of which are low-income areas.

Within the study area the primary causes of nitrate pollution was cropland (96% of total) where nitrogen applied to crops is leached from the root zone to groundwater. Other causes included percolation of wastewater treatment plant (WWTP) and food processing (FP) wastes (1.5%); urban parks, lawns, golf courses, and leaky sewer systems (less than 1%).

In the Midwest Professor Matt Liebman, an agronomist from Iowa State University, reported that, “…the Iowa Department of Natural Resources classified 44% of the state’s streams and rivers and 47% of its lakes as ‘impaired’ by excessive levels of nutrients, sediments, and bacteria. In layman’s terms, impaired water may be unsafe to swim in, uninhabitable by fish and other aquatic life, and unsuitable for drinking without intensive treatment…we now live a world in which scarcity of the basic necessities of life, including food and water, is an unavoidable reality for billions of people.”[5]

Water is vital for life and a gift from our Creator.

Each of us has a responsibility to do all that we can to ensure God’s gifts are shared fairly. Access to clean water is no longer to be taken for granted. Land management practices impact water quality.

I don’t have time today to discuss other environmental concerns such as:

Let me take one minute to talk about our receptivity, receptivity to the message from Pope Francis. Unfortunately, many in our culture are not receptive to our Holy Father’s letter. They’re unwilling to open this precious gift and take it into their hearts for a variety of reasons. In late June I had the opportunity to travel in a taxi with Cardinal Peter Turkson, the president of the Pontifical Council for Justice and Peace, and a promulgator of the encyclical. I asked him how Pope Francis’s letter was being received around the world. He said many countries were very receptive to the letter, but the United States was one of the exceptions, with many speaking and writing negatively about the Pope’s message.

In closing I think of the love letters I received from my wife, Sally, while we were courting. Living on opposite coasts, the letters we wrote to each other were a significant means of communicating for nine months. I used to look forward to each letter with great anticipation, pouring over her words again and again, trying to read between the lines. My heart was very receptive to her letters, because we were in love. I knew she loved me, and I loved her. The fruits of this receptivity are evident to me now in the form of children and a loving family. The Church’s encyclicals are like modern love letters from God. They are written by the Holy Father of the Church because of his loving concern for the world.

I believe that Laudato Si can also be extraordinarily fruitful, but only if we’re receptive to it; only if we begin from a place of love. My prayer for all us it that we ask the Holy Spirit to open our hearts and our minds to see the truths in this love letter to the Church, and ask God how we ought to respond.