Family and friends of Nicholas Black Elk, the Oglala Sioux who was known as a holy man, chief, and dedicated catechist, recently presented the diocese of Rapid City with a petition to open his cause for canonization.  Over 1600 signatures from across the U.S. and Canada united to urge Bishop Gruss to continue the process of Black Elk’s canonization.

As relatively few people know about the life of this extraordinary man of God, we present this short biography of Nicholas Black Elk, reprinted with kind permission from Catholic Exchange. 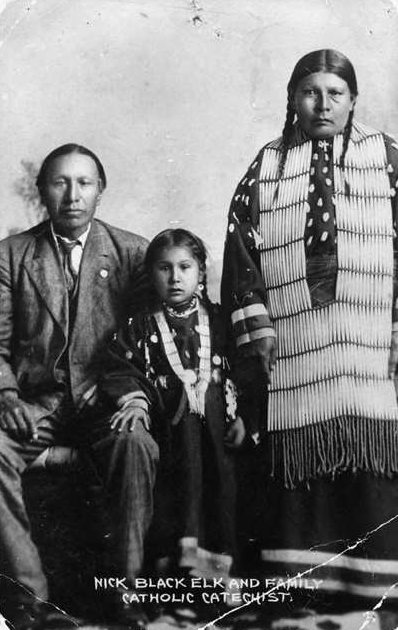 Every saintly life involves heroic bravery wedded to humility.  From Saints Damien and Marianne of Moloka’i to St. Jane de Chantal to St. Peter himself, the saints give us example after example of what courageous acts we are capable of when we humbly approach Christ.

Sometimes, though, the act of bravery and humility that marks a saintly life takes place in the most unexpected of places- in a place at the end of everything, a place seemingly void of the promises of Christ.

For the Plains Indians at the end of the end of the 19th century, it must have felt like dying.  A way of life that had been passed down for generations was unraveling, the strands being pulled from the whole by westward expansion, wars, and disease.  The traditional, nomadic way of Plains life was deemed incompatible with the burgeoning U.S. government’s vision of a post-Civil War America, and after a number of battles, most notably at Wounded Knee, tribal Americans were settled onto reservations, left to move forward into the future, cobbling together pieces of their past.

It was against this backdrop that an Oglala Sioux named Black Elk came into the world.  Born a couple years before the end of the Civil War, Black Elk’s childhood took place among traditional practices, his young adulthood during the tumult of the Reservation Era, and his adulthood in a post-expansion America.  His life spanned more than the sum of its years.

When he was nine years old, Black Elk suddenly became monstrously ill.  While immobile and unresponsive for a number of days, the young boy was experiencing a vision of cosmic and spiritual significance.  When he was returned to good health, he pondered the meaning of his vision in the silence of his heart for the next eight years, finally sharing it with a tribal medicine man.  The elder man was impressed by the greatness of the vision, and assured Black Elk that it would be good medicine for the people, leading them toward healing and peace.

While Black Elk did eventually become a medicine man and healer among the Oglala, he took a side trip first, joining up with Buffalo Bill’s Wild West Show and touring Europe as one of the performers.  At one point, Black Elk and three other Lakota Sioux were separated from the troupe and left stranded in Europe. Truly strangers in a strange land, Black Elk joined up with another wild west show, continued touring Europe, and learned English while performing for the likes of the Queen of England.

Back in America and on the Pine Ridge Reservation, Black Elk carried out the duties of medicine man.  While various Christian denominations had set up missions on the reservation for a good number of years, indigenous culture and religion often butted up angrily against Christianity.  One such point of friction was at the sickbed.

When faced with a sick and dying family member, the Lakota would often call for a trusted medicine man first.  If that failed to produce results, priests from the local mission would be brought in, in a type of “all else has failed” situation.  Trained first and foremost to address the human soul, the priests would baptize the patient, then attempt to keep the new Christian’s soul properly disposed to meet its Maker by warding off further contact with medicine men.  In the eyes of many traditional healers, however, the “pouring on of water” resulted often enough in the death of the newly baptized to heap even more distrust upon the priests and pastors.

Contact points like these did nothing to endear Christianity to the Lakota; already seen by a large section of the reservation inhabitants as a bastion of oppressive European-American culture and control.  And this is what makes Black Elk’s act of courage and humility all the more heroic in scope. 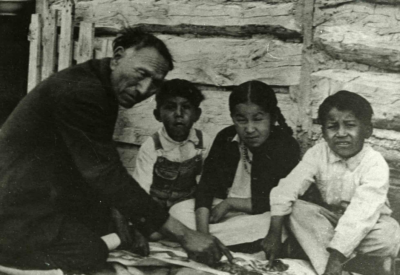 A family in the Pine Ridge reservation had a little boy who was dying.  Having heard of Black Elk’s skill as a medicine man, they called for him to come and heal the boy.  Black Elk came, and began the ceremony, offering tobacco, singing sacred songs, and beating on his drum and rattle.  Midway through, priests from the local mission arrived, having baptized the boy previously and coming to anoint the boy in his final moments.  One priest, Father Lindebner, came into the tent, and upon seeing Black Elk performing traditional ceremonies over the boy, threw the tobacco into the stove, and the drum, rattle, and Black Elk himself outside.

Black Elk’s daughter, Lucy Looks Twice, would tell the story with great affection and love in later years.  When Fr. Lindebner came out of the tent, she describes it as follows:

“…he [Fr. Lindebner] came out and saw my father sitting there looking downhearted and lonely- as though he lost all his powers.  Next thing Fr. Lindebner said was, ‘Come on and get in the buggy with me.’  My father was willing to go along, so he got in and the two of them went back to Holy Rosary Mission…[there] the Jesuit brothers [were told] to clean him up, give him some clothes…and a hat to wear.  After that had been done, they fed him and gave him a bed to sleep in.  My father never talked about that incident, but he felt it was Our Lord that appointed or selected him to do the work of the Blackrobes [what the Lakota called the Jesuit priests].  He wasn’t bitter at all.”

From this meeting, Black Elk, now baptized Nicholas Black Elk, worked and moved among his people on the Pine Ridge Reservation as a Catholic catechist.  For the next 45 years, he served as a living point of common ground between the Lakota and Christianity, leading some 400 souls to Christ.  Nicholas demonstrated a powerful gift for teaching, able to grasp complexities of theology and explain them to people on the reservation in a way that honored and incorporated, rather than eradicating and replacing, their cultural signs and symbols.  With humility nearly impossible to grasp, Nicholas Black Elk even allowed the Holy Spirit to show him a new understanding of his great vision, the thing that had been a central truth of his life since he was nine.

There are a number of authors and armchair speculators who refuse to believe Black Elk’s conversion was genuine.  Or rather, they refuse to believe that it was motivated by faith, and not self-preservation.  They seem unable to believe that a man who lived through a period of massive cultural transition, who moved through the strange lands of Europe of his own free will, would be able to demonstrate that fluidity and autonomy in his spiritual life.  And though Nicholas Black Elk’s own family tells a story of a man on fire for the Faith, their voices are discounted and ignored to fit outsiders’ narratives.

Did Nicholas Black Elk experience a true conversion outside the tent of a dying boy, or were the following 45 years of his life spent as a charade, an elaborate game of survival?  As the judgment of the human heart is reserved for God alone, all we can do is observe the events of the man’s life.  And so this article closes with this:

Shortly before his death in 1950, Nicholas Black Elk told a number of friends and family that he felt God would grant a sign of His Mercy and Kindness upon the death of His servant.

In Lakota tradition, the spirit leaves the body upon death and is judged.  If found worthy, the spirit travels along the Milky Way, known as the “spirit trail”, to the “land of many lodges”.  The night of Nicholas Black Elk’s wake, every person in attendance, Lakota and non-Lakota, Christian and non-Christian alike, stopped and took note of the sky above.  The Northern Lights were shining like never before, filling the sky from horizon to horizon with flares and fire absolutely singular in its intensity.  Signs were seen in the heavens, including a figure 8 and a circle.  A Jesuit priest there to say goodbye to his friend described it as “fireworks…a celestial presentation…sort of a celebration.  Old Nick had gone to his reward and left some sort of sign for the rest of us.”

A fitting tribute to a man whose life was filled with the importance of visions and signs, and who demonstrated saintly courage and humility to allow God, and not his own ego, to imbue both with meaning.

Author’s note: To learn more about Nicholas Black Elk’s life and conversion, read Black Elk, Holy Man of the Oglala by Michael F. Steltenkamp.  To read the entire petition of canonization presented to the diocese of Rapid City, click here.