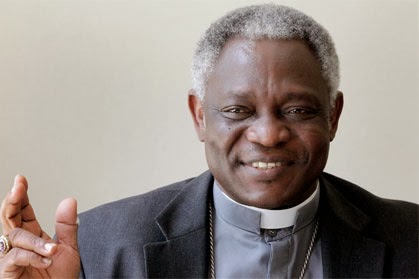 On March 5 at Saint Patrick’s Pontifical University in Maynooth, Ireland, Cardinal Peter Turkson spoke at length about Pope Francis’s intention this year to publish an encyclical letter on human ecology. The Vatican has made clear that global inequality and the destruction of the environment are interrelated.

Cardinal Turkson is President of the Pontifical Council for Justice and Peace and was invited to deliver the Trócaire 2015 Lenten Lecture. Trócaire is the overseas aid agency of the Irish Catholic Bishops’ Conference, and their focus for Lent this year is the growing problem of drought as a result of climate change.

Cardinal Turkson stressed the idea of “integral ecology” — the intertwining of economic, ecological and social concerns.

“Pope Francis intends to publish an encyclical letter later this year on the theme of human ecology,” Cardinal Turkson said. “It will explore the relationship between care for creation, integral human development and concern for the poor.”

Cardinal Turkson went on to say that the timing of the encyclical is significant because “2015 is a critical year for humanity.” Later this year, the U.N. General Assembly is expected to agree on a new set of sustainable development goals running until 2030.

In December, the Climate Change Conference in Paris will receive the plans and commitments of each Government to slow or reduce global warming.

“The coming 10 months are crucial, then, for decisions about international development, human flourishing and care for the common home we call planet Earth,” Cardinal Turkson said.

In the evening lecture at Saint Patrick’s Pontifical University in Maynooth, just west of Dublin, Cardinal Turkson focused on four principles related to integral ecology.  He described these in detail as reflected in the ministry and teaching of Pope Francis. The basic principles are:

On this last principle, Cardinal Turkson explained that everyone has a part to play, no matter how small, in order to make the changes needed. These actions reach to the fundamental pillars that govern a nation, he said: “life, family, integral education, health, including the spiritual dimension of well-being, and security.”

In responding to the threats that arise from global inequality and the destruction of the environment, Cardinal Turkson reiterated that every action counts. “We all have a part to play in protecting and sustaining what Pope Francis has repeatedly called our common home.”

An integral approach to ecology, he said, is not limited to scientific, economic or technical solutions.

“At the heart of this integral ecology is the call to dialogue and a new solidarity, a changing of human hearts in which the good of the human person, and not the pursuit of profit, is the key value that directs our search for the global, the universal common good.”

Early on in lecture, Cardinal Turkson spoke of mercy.

Misericordia in Latin, or trócaire in Irish or mercy in English: this has become a keyword in the ministry of Pope Francis. As in the Scriptures, Pope Francis often associates mercy and tenderness. Indeed, in his Apostolic Exhortation, Evangelii Gaudium, he appeals to all of us to bring about a ‘revolution of tenderness’, a revolution of the heart.  For ‘there is no longer room for others, no place for the poor’ when our interior life becomes caught up in its own interests, or when our national life and economy become caught up in their own interests.

At the conclusion of his address, Cardinal Turkson said it plainly: “Let us become artisans of the revolution of tenderness.”

Catholic Rural Life is working closely with Cardinal Turkson and the Pontifical Council for Justice and Peace to incorporate the Church’s teachings on “human ecology” into a faith-based approach to agriculture. This project, entitled Faith, Food & the Environment: The Vocation of the Agricultural Leader, continues to unfold, with an international gathering taking place in Milan in June 2015. Cardinal Turkson is expected to be in attendance.

To learn more about the Faith, Food & the Environment project, please visit the dedicated website.