Within Hispanic ministry there are communities of people unrecognized for their special place in both the history of American Catholicism and the preservation of cultural and spiritual values. I speak of the numerous indigenous peoples of Latin America. I have only been exposed to a few of these indigenous cultures; Mixteco, Mayan, Zapotec, Otomi and Trique. A significant population of indigenous people has recently come to the United States from the states of Oaxaca, Guerrero, Chiapas and from Guatemala.

The indigenous communities present the Church with significant challenges and opportunities. Among the challenges are language, the organization of family life and the experience of popular religious practices among the varying groups. There is beauty and energy around the experience of indigenous peoples struggling to maintain the values and traditions of their cultures in the modern world. Two experiences can enlighten our concern for people of great faith and tradition.
Fiesta for San Martin Caballero
Near Madera, Calif., there is a community of Trique from the state of Oaxaca. Five years ago they held their first festival for St. Martin of Tours in Madera. The fiesta began with a Mass with about 40 participants. The next three years they got up to 75 for the Mass. Last year and this year there were about 300 when Mass began and by the end of the Mass and beginning to eat there were over 500 and nearly 1,000 present for the dance in the evening.
Last year I celebrated the Mass in Spanish and after Mass I began to discover that many of the women spoke only Trique, most of the men spoke Trique and Spanish and the children spoke Trique and English. When I tried to speak with the women of the community and discovered how few could communicate in Spanish, all I could do was point at the wonderful food and say, “Gracias.”
Most of the people come from a village named San Martin, high in the mountains of Oaxaca. I met with organizers for the festival several months before the event. A man said, “Father, I left Oaxaca when I was six years old. As we migrated first to Sinaloa, then Baja California and arriving in the United States when I was 19, all along the journey my father celebrated San Martin. I took up my father’s devotion, but know nothing of who was San Martin. I participate in this devotion in memory of my father only.” I asked one of the other men to explain the devotion to him and was amazed at the response. He said, “For me it is the statue of San Martin on his horse as a soldier extending his hand to a poor beggar. For me it is the hand of God lifting up the poor man to know his own dignity. I am the poor man and San Martin lets me know I am loved by God.” 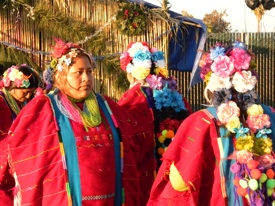 Celebrating Mass for the Trique festival is humbling and challenging. The people have a profound depth, but in years of migration many have become separated from their traditions and even feel unwelcome in their own Catholic faith. Many cannot read, have been deprived of significant education, and live in a country where even among other Latinos they are outsiders, as Spanish is their second language, if spoken at all. The Mass is one moment of grace for people living outside of their native environment.
The challenges of ministering to the Trique and other indigenous groups are significant. We need to recognize the difficulty of receiving evangelization in a second language. The patron feast of a community needs more than solely to be a time to share great food and music, but a time to ask how we can evangelize and receive into the church such humble and beautiful people. They are people deeply committed to their Catholicism, but they are seldom in our churches. They often have unstable lives because of immigration injustices and poverty. They often experienced prejudice and isolation in the churches of Mexico and here they are lumped with other Mexicans and neither catechists nor priests have walked with them in their sense of isolation. When given the opportunity to celebrate their heritage they do the gritos, “Que viva la Virgen, que viva San Martin, que viva Cristo Rey.”
Supporting indigenous marriage
Several months ago a 16-year-old young woman asked me to do her wedding. She is Mixteco. When I asked her mother if she thought her daughter was mature enough to enter marriage, the mother responded, “She is two years older than I was when I married.” I met with seven couples related to the young woman to ask about the experience of marriage in their village and culture. I asked the oldest man, “How old were you when you married?” He responded, “I was 13 and my wife was 12.” I asked how long they were married. He said, “Forty-two years.” I asked the other couples and discovered that the oldest at time of marriage of the men was 19 and of the women, 17. I asked about their other relatives being married so young. I asked if any of the family members was divorced. They looked with shock that I would suggest divorce. They all responded, “None, Padre.”
All of these adults were from one town. I left that meeting having to face my concerns about doing a marriage for such a young couple. It was more work as a priest preparing them because of their youth and the difficulty of communicating to them in a second language. However, the cultural strength of this young couple in their commitment to permanence, fidelity and virginity before marriage made the marital preparation an uplifting experience for me. I recently celebrated their marriage and pray that they may continue to preserve their values of culture and faith.
Challenges and hopes
Migration is a difficult choice for all who choose to leave their country of origin. Many of the indigenous migrants arriving in the United States have a long history of poverty and abuse by society in their nations of origin. Along the way there are temptations to forget the culture and become detached from the supports of their values, both in society and within the Catholic Church. Our ministry begins with recognizing the gift of culture and the faith of the people. We also need to be flexible in discovering paths open for evangelizing and being evangelized ourselves by the indigenous peoples of the world.
Father Mike McAndrew is the Director of Campesino Ministry for the Diocese of Fresno, Calif.
Photo: The Trique community celebrates the Feast of St. Martin Caballero.