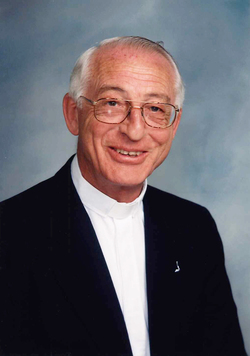 CRL’s staff is mourning the passing of Fr. Leonard Kayser, a South Dakotan priest who briefly served as the interim executive director for Catholic Rural Life in the 1970s.

From his obituary in the Argus Leader:

An advocate for the agrarian life and a promoter of the lessons that working the land offer us. Father Kayser freely and actively shared how his upbringing on the farm formed in him the disciplines of a simplified life and a recognition of God’s instrumental presence in the bounty we receive. Through his tenacity as well as the context of faith through which he taught of the importance of this noble trade, Father Kayser was well-known in the farming community as a champion for the rural life.

CRL Executive Director Jim Ennis remembers meeting Fr. Kayser in Yankton, S.D., in 2009 and had fond words to say of him.

“I was impressed by both his love of rural life and his continued support of Catholic Rural Life over many, many years,” said Ennis. “He continued to be an advocate on behalf of those who didn’t have a voice in rural America, humbly serving men and women in his community.”

A Mass of Christian Burial will be prayed for Father Kayser on Saturday, February 28, 2015 at Saint Mary of Mercy Church in Alexandria, SD beginning at 10 AM. The Most Reverend Paul J. Swain, Bishop of Sioux Falls, will serve as celebrant of the Mass. Interment will be at Saint Mary Cemetery in Alexandria immediately following the funeral Mass.