Exploring the Vocation of the Agricultural Leader

Exploring the Vocation of the Agricultural Leader

In April 2012, the Pontifical Council for Justice and Peace launched a new reflection, The Vocation of the Business Leader. This 30-page booklet would provide business leaders with a set of practical principles for living their vocation in a way consistent with Catholic social teaching. 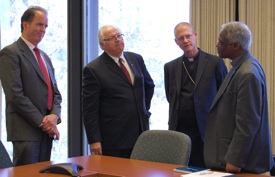 2012, he heard Cardinal Peter Turkson, president of the Pontifical Council for Justice and Peace, refer to this important new reflection by the Church. An idea came to mind.

“I thought to myself, I would like to see something similar developed to help leaders within the food and agricultural sectors,” Ennis recalled. “I knew that we needed a set of principles to guide them as they face the many challenges related to feeding the hungry and being good stewards of God’s creation.”

Ennis’s idea took root soon after he returned home. Within a year, CRL developed a partnership with members of the National Farmers Union and the University of St. Thomas, Saint Paul Seminary School of Divinity, to get the project up and running.

The organizations presented a proposal to Cardinal Turkson in October 2013 and the cardinal gave his blessing for the Pontifical Council for Justice and Peace to also partner in the initiative.

Symposium on Faith, Food and the Environment

The first leg of the effort will take place later this year. A national symposium entitled Vocation of the Agricultural Leader: Faith, Food and Environment will be held in St. Paul from November 5-7. The symposium will bring together agricultural leaders, theologians, and environmentalists to address the challenges facing the farming community today.

An international symposium, most likely in Italy, will follow the year after.

Ennis says the outcomes that emerge from both symposiums will be used to create a comprehensive set of resources to help agricultural leaders around the world navigate their vocation in the shifting landscape of the 21st century.

Much of the conversation will focus on the impact economic, technological, and cultural changes have on agricultural practices and rural development, often in ways that don’t promote the common good or the well-being of local communities and farmers. The symposiums will develop practical solutions rooted in Christian wisdom by relying on the expertise of both food and agricultural leaders and theologians.

According to Bruce Miller, who is a director with the Minnesota Farmers Union, such a collaborative effort is long overdue—especially considering that food issues affect literally everyone on the planet.

“If we don’t come together to address problems facing the agricultural sector, we run the risk of failing to meet the ever-increasing demand for food production using sound environmental approaches and ethical models,” said Miller. His organization of Minnesota farmers is also a co-sponsor of the November symposium.

Miller says the symposium should be beneficial for all who attend. “Farmers and rural residents will get to actively engage with people” they don’t normally hear from in their daily lives, he said, while academics and activists will have the opportunity to “learn from the practical experience of the people most directly connected to the farms.”

Intersection of moral thought and agriculture

One of the academics slated to speak in November is Dr. Christopher Thompson, a moral theologian who teaches at the

University of St. Thomas. He says that a farmer is called to be “a prudent steward of God’s creation—an incredible vocation,” but that the Church in America hasn’t done enough to help farmers address their responsibilities and tasks in a decidedly Catholic way.

Thompson pointed out that not a single one of the nation’s 244 Catholic colleges offers a degree in agriculture. “How could one of the most important and extensive economies escape Catholic scrutiny?” he asked.

Thompson believes November’s symposium, and the Faith, Food, and Environment project at large, will go a long way toward highlighting the “intersection of Catholic social thought and agriculture,” but he also hopes it’s just the start of a bigger, more sustained focus on what he’s described as “the theology of food,” possibly including the creation of a Pontifical Institutes devoted to agriculture and the environment.

“I’m hoping this conference points the way to what might be possible as a broader project within the Church,” he said.

According to Thompson, there’s always been a connection between food and morality—going back to “when Adam and Eve made a particularly bad food choice!”—but that link has escaped most people’s attention in recent times.

“Our original vocation ‘to till and to keep the earth’ remains just as vital as it did in the early days of Genesis,” he said. “God tasks us with dominion over the earth,” requiring a posture of “wonder and delight” that emphasizes stewardship, not domination.

Miller agrees that it’s time for a focused discussion of the “morality of food,” an issue that may not grab headlines, but is nonetheless something that affects “people across the world and in our own backyards in America.”

Furthermore, Miller says the faith doesn’t only inform the agricultural leader about the nature of their vocation—it helps them live it.

“Farmers have a lot of challenges and a lot of responsibilities,” he said. “They’re called to develop strong rural communities, work year-round in ever changing climates to support their families, and also share in the responsibility of feeding the world. Faith allows farmers to survive and thrive through the ups and downs of each year.”

To stay on top of developments in this area, please make sure to bookmark our sister site, Faith, Food & the Environment.

Dr. Thompson makes a very good point that The Catholic University’s would very much benefit farmer’s in an agricultural program because they (the university) are not at the beck and call of “big agriculture”. I wish someone would develop lay certificate for farming/faith. I would come to Iowa to learn if CRL developed it. While I am not a farmer, but a gardener I spend summers in rural Michigan and will be retiring there. I would like to be more involved in you organization.