Early in November, CRL celebrated over 90 years of ministry and service to the countryside with a special banquet dinner. The event was a time to reflect on the origins of the organization and the work it continues to do. 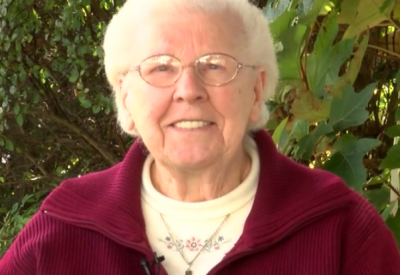 It was also an opportunity to recognize the tireless efforts of an advocate and servant for the rural poor, Sr. Therese “Terry” Martin, CND, of the Diocese of Charlotte, North Caroline. Sr. Terry is this year’s recipient of Catholic Rural Life’s Archbishop Edwin V. O’Hara Advocacy Award, an award that is named for the organization’s founder and recognizes someone who carries on his spirit of dedication to the Church in the countryside.

Included below is the nomination letter for Sr. Terry Martin that was submitted to Catholic Rural Life by the Diocese of Charlotte. Also, make sure to check out Sr. Terry’s gracious acceptance speech. May her work and dedication be an inspiration and example to us all!

For over twenty-two years, Sr. Therese Martin, a member of the Congregation of Notre Dame, has been a beacon of charity and an ambassador of justice for people struggling at the margins in the far western Appalachian counties of North Carolina.  “Sr. Terry,” as she is more readily identified by those who know her, has personified “Caritas Christi” in her ministry as Far Western North Carolina Outreach Worker for the Diocese of Charlotte.  Her tremendous witness to the preferential love of Christ for the poor has been made manifest in so many ways…bringing food, clothing, and other essential items to migrant farm workers and advocating in their behalf…serving as a team member of Catholic Charities family strengthening services…helping to establish a community center for the people of Texana (a primarily African-American community near Murphy, NC)… making sick call visits at all hours of the day…working with victims seeking refuge at domestic violence shelters in Hayesville and Murphy, NC…making sure children in struggling families have shoes, coats, and supplies for school…and helping so many adults to succeed in completing their GED programs and ESL classes.

Sr. Terry, who recently celebrated 65 years of consecrated religious life, is a dynamo of Christian service, justice and advocacy in the rural communities of far western North Carolina.  Earlier this year she received an apostolic blessing from Pope Francis to mark her many years of dedicated and loving consecrated service.  Everyone in far western North Carolina knows her and her smile, and everyone knows that when they come to her for assistance they will never be turned away.  “God will provide” Sr. Terry says, and she relates story after story of someone coming to her in need of something…e.g., a refrigerator, a new transmission, bedroom furniture, and then that very same day a call comes in from a local parishioner or a church in the area asking Sr. Terry if she could use a refrigerator, a bedroom set, or some cash for the needs of the poor.  With a peaceful and confident air, Sr. Terry has said “Items come in and items go out…I honestly do not know what the Lord will bring each day. It’s all pure gift!”  At the new location of Immaculate Heart of Mary Church in Hayesville, the parish community made sure that a space the size of a small warehouse was set aside for Sr. Terry’s “donated goods,” complete with a loading area!

Fr. George Kloster, a friend of Sr. Terry and her pastor for over 15 years until his retirement this past July, remarks that Sr. Terry is also a valiant promoter of justice.  “When she experiences a blatant injustice done especially to the poor and powerless she has a fierce–and justified–anger,” states Fr. George.  “She does not sit quietly when in the face of exploitation or oppression. She walks in the tradition of the prophets of the Hebrew Scriptures when the situation calls for righteous indignation.  This enhances her ministry and credibility especially among the poor.”

Catholic Charities has benefited from Sr. Terry’s long-time service as a member of its Office of Economic Opportunity Advisory Board.  She has helped to fund raise at evening galas, served soup at annual community friend-raiser and fund-raisers in downtown Murphy, and accompanied agency staff in making house visits to meet immediate needs of individuals and families.  Netta McFaddin of Catholic Charities OEO, in support of this nomination, shares that “Sr.Terry models Catholic Social Teaching.  Her work with the Hispanic community is so very important.  She provides transportation to doctor and WIC appointments, makes many home visits, advocates on behalf of the voiceless to attorneys, and offers compassion to families.  She has assisted Hispanic families in their achievement of home ownership.” 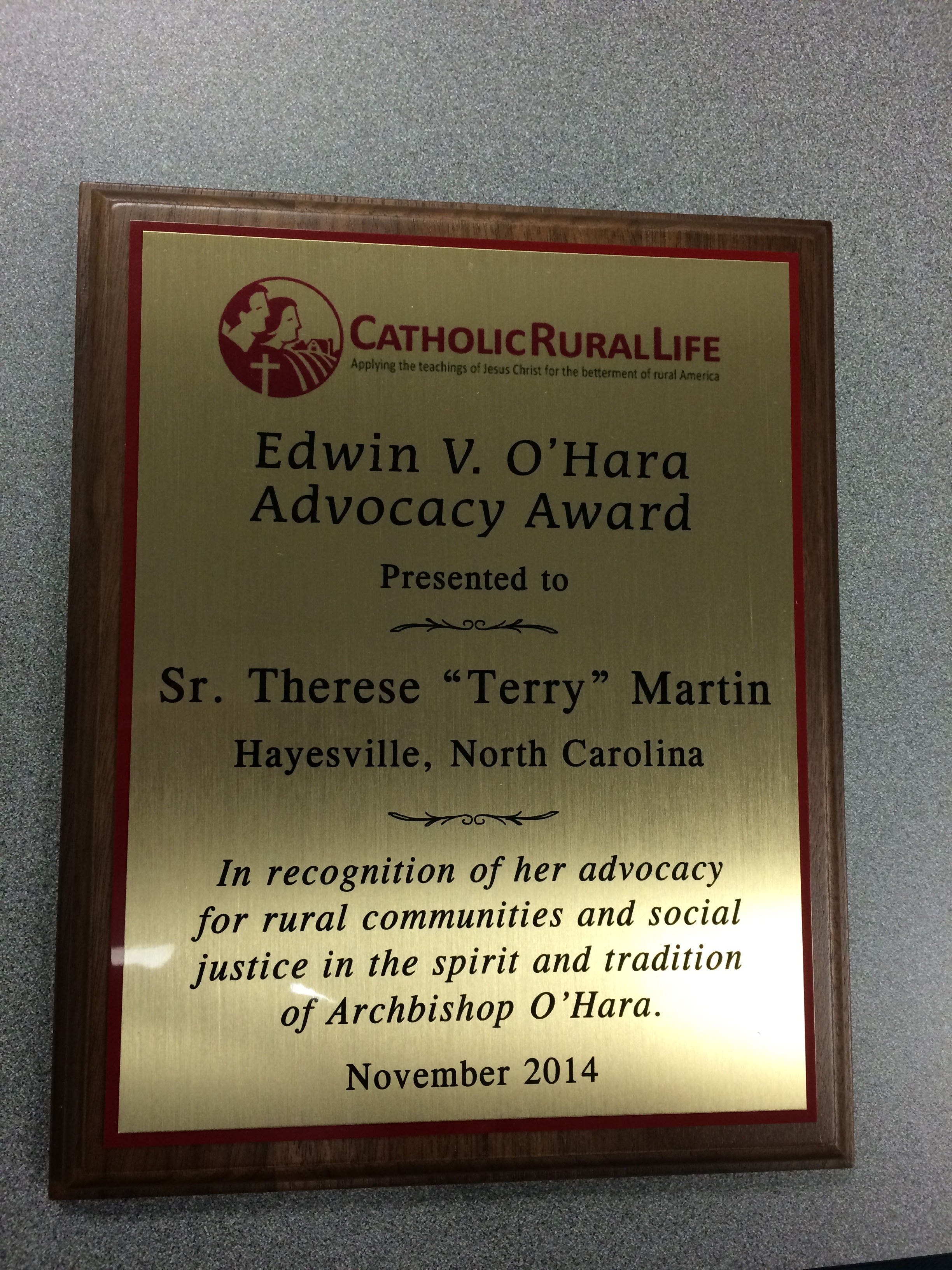 Her years of Christian service in rural ministry extend all the way back to the early 1970s, when she came from being an educator in the New England region for almost 25 years to St. Charles in southwestern Virginia.  From a community center base in St. Charles, that she helped establish with three fellow sisters, Sr. Terry worked in both eastern Kentuckyand southwest Virginia in providing adult education programs and GED classes.

Sr. Terry sees her life’s work as following in the footsteps of the foundress of her religious order, St. Marguerite Bourgeoys of Montreal, who worked in the 17th century to educate poor women and orphaned children through the establishment of one of the Church’s first communities of women religious who were not cloistered.  Inspired by the charism of her community, Sr. Terry has helped to nurture a giving spirit in numerous lay women in western NC by guiding them in the process of becoming lay associates of the Congregation of Notre Dame and helping to engage them in a variety of ministries.

So many have been blessed by Sr. Terry’s compassionate heart, keen insight, and dedicated service.  From New England to the mountains of the southeast Appalachia, no life in her path has remained unchanged.  We in the Diocese of Charlotte are so grateful for all that Sr. Terry has done for the Church, for Catholic Charities and especially for our brothers and sisters in need!