This blog post originally appeared at the dedicated Faith, Food & the Environment website. Check it out for more content, including a program of events, speaker bios, and transcripts as they become available!

The stage is set for the international edition of the Faith, Food & the Environment symposium, which will take place at EXPO 2015 within the city limits of Milan, one of Italy’s most cosmopolitan and dynamic metropolises.

But in the lead-up to the symposium, which begins with dinner on Friday night, participants aren’t staying among the glitz and the glam and the excitement of Milan.

Instead, they’re quietly nestled in a 16th century monastery, about 40 kilometers to the northwest. 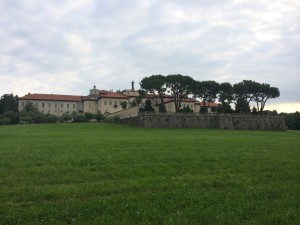 At first glance, staying at Villa Sacro Cuore seems like a mistake, an inconvenience. The ride to Milan is long, meandering through innumerable small towns and slowed by traffic. The internet connection is spotty at best. And the 10:30 pm curfew is a bit of an imposition.

But the location serves a larger purpose—a purpose beyond earthly expediency. Staying at Villa Sacro Cuore is an opportunity to ground the symposium and the larger Vocation of the Agricultural Leader project in a deeper reality—the reality that it is our faith, not a flimsy humanism or a desire for worldly glory, that brings us together and spurs us to action.

Farmers, theologians, and scientists alike have gathered here because they believe agriculture is a unique calling, replete with ethical dimensions and theological significance. We farm not for our own sake, but in response to God’s invitation to work with Him as co-creators, stewards of His creation. The tranquility and beauty of the monastery has provided innumerable opportunities for this truth to sink in. 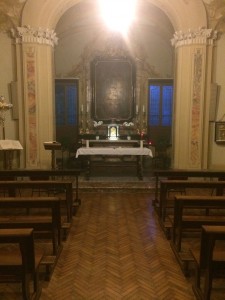 There is both the time and the space for prayer and reflection within the confines of Villa Sacro Cuore. A number of beautiful, frescoed-adorned chapels offer the opportunity for meditation with the Blessed Sacrament. Symposium participants had the privilege of celebrating Mass today with Cardinal Dionigi Tettamanzi, the archbishop emeritus of Milan. And what Catholic monastery would be complete without a kneeler and a copy of the New Testament in each room?

The monastery’s immaculate grounds are fertile soil for quiet, thoughtful conversations among symposium participants, who come from different corners of the world. Here, in peace and tranquility, they can share with each other the struggles and joys of farming in their respective countries, a living exercise of Christian solidarity.

Villa Sacro Cuore’s fauna and foliage also offer theological backing to the symposium, as the monastery grounds are perhaps an ideal example of the type of integrated ecology that Pope Francis teaches us in Laudato Si. Human and natural wellbeing are not mutually exclusive here, but instead build upon each other. 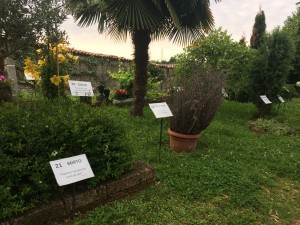 A garden including several of the plants mentioned in Holy Scripture—from juniper to mustard—reminds those gathered that God made creation good, and affirmed its goodness when His Son—Our Lord—lived among it and partook in its bounty. And the surrounding Italian countryside, where stucco houses blend seamlessly into small plots of corn and wheat and barley, and where seemingly every residence has its own personal garden, helps to underscore the fact that farming is not merely an economic endeavor, where profits are the only relevant criteria; instead, it is a fundamentally human pursuit, in which the dignity of the human person and the common good must always be held in highest esteem. 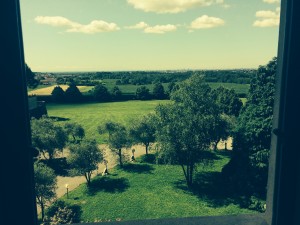 And finally, from the southward facing windows, one can see the lights and the skyline (and the smog) of Milan in the distance. This is a reminder that the goodness, truth, and beauty of our faith, which is perhaps most strikingly evident in the oasis that is a 16th century Italian monastery, is not meant to be buried and hidden. Instead, it is meant to be brought out to the world, which is exactly what the Faith, Food & the Environment symposium will do when it makes its mark at EXPO 2015 this weekend.

Yes, staying at Villa Sacro Cuore may be, by the world’s standards, an inconvenience. But then again, the Christian life has always seemed inconvenient and foolhardy to those whose vision is limited to this world and whose aims don’t go beyond their own interests. We are blessed beyond measure to begin our symposium here, and are looking forward to the days to come.

Follow #FFEMilan on social media! Check out our dedicated symposium Facebook and Twitter feeds. Want to join the conversation? Simply use #FFEMilan in your tweets and posts!