CRL’s focus is undoubtedly on the countryside in America. But sometimes it’s helpful to broaden one’s perspective. 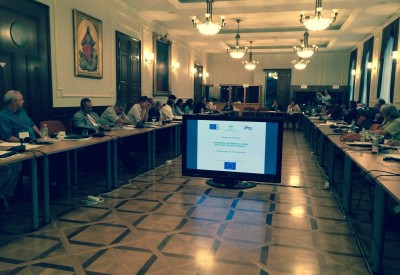 That was the thrust behind CRL’s participation in two international farming events this past week. Executive Director Jim Ennis and Dr. Christopher Thompson, a CRL board member, attended a study meeting on the status of family farming and food security in the European Union on September 4 and 5. That was followed by a meeting of International Catholic Rural Association (ICRA) members on September 6. Both events were in Esztergom, the seat of the Catholic Church in Hungary.

Ennis said that while the two meetings were held overseas, they still pertained to Catholics focused on rural life in the States.

“It’s vitally important that we understand that the suffering and challenges that we encounter in the U.S. are shared by our brothers and sisters in other parts of the world,” he explained.

The conference, hosted by ICRA and EZA, was entitled “Subsidiarity and Solidarity in Order to Revive and Preserve European Union Cohesion.” Ennis, who is the president of ICRA, convened the meeting, which featured a number of different presentations from regional agriculture experts.

Many of the issues explored were relevant to agricultural in the U.S. such as an aging farm population, the consolidation of agri-business, and the decline of the family farm. Ennis said CRL’s participation allowed the organization to share successful models with its European counterparts. He added that the conference “underscored the need” for this type of “healthy exchange.”

The ICRA meeting that followed was similarly focused on international collaboration, this time in regards to a specific project: The Vocation of the Agricultural Leader. The initiative is being led by CRL and the Pontifical Council for Justice and Peace, and aims to produce faith-based resources that will provide ethical guidance to agricultural leaders and the next generation of farmers.

The first event in the project is the upcoming Faith, Food & the Environment symposium, which will take place November 5-7 in St. Paul, Minn. In Hungary, ICRA members met with a representative of Peter Cardinal Turkson, the president of the Pontifical Council for Justice and Peace, who will be keynoting the symposium.

Two decisions came from the meeting. First, plans were made to produce a working document following the November symposium, which would then be expanded upon at an international symposium to be held in Italy in 2015.

Additionally, Ennis reported that the November symposium will include increased international participation to bring in a broader perspective. ICRA members from Uganda, Chile, the Philippines, France, and Italy will participate.

Ennis said the symposium, although national in focus, will benefit from input from farmers in other countries, once again highlighting the importance of learning from the experiences of others.

“The U.S. has a lot to share with the international community, not only in terms of resources, but also great ideas,” said Ennis. “And we can learn a lot from farmers in other countries as well. It’s definitely a mutual exchange.”