“Campesino Ministry: The Faith of Migrants” – by Fr. Mike McAndrew

“Campesino Ministry: The Faith of Migrants” – by Fr. Mike McAndrew

For thirteen summers I have run summer First Communion programs for migrant farm worker children in Oregon and California. Each year, several Redemptorist seminarians and lay volunteers have accompanied me in orchards, vineyards, dairies and isolated communities, providing access to sacraments for children of migrants. This summer our Redemptorist summer migrant mission team celebrated First Eucharist with 51 children and teenagers in Allensworth, Calif. There were eleven evening classes for both the children and the parents. This year was exceptional, with almost perfect attendance of not only the children but also the parents.

Each year three or four families leave lasting impressions on the mission teams. One of those families touched us in a special way. This family ministered to us more than we to them.
A Migrant family’s journey of faith
Pompeyo and Elia have been married 38 years. They have two sons and 10 grandchildren. In 1999 they came as a family to work in the United States. Pompeyo, Elia, the two sons and their wives and two infants arrived in Arizona looking for work in whatever opportunity they could find. During their first 12 years in the United States, their search for work took them to nine states: Arizona, California, Texas, South Dakota, Kansas, Georgia, Nevada, Maryland and Mississippi. They moved over fifteen times, ending up back in California in 2009. Eight more children were born to the two sons. They always stayed together as a family in their journey. 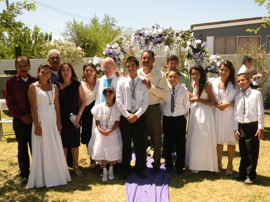 As with many Catholics, there was a time when Pompeyo and Elia found their practice of the faith lacking and inconsistent. They wish that they had been better examples for their children, but they grew into more consistent practice of their faith as their children grew into adulthood. All ten grandchildren were baptized, but only the oldest received her First Eucharist. Mobility, poverty and heartache were among the reasons that none of the others received First Eucharist.
In 2009 the family experienced the first of several life changing challenges. The wife of the older son died suddenly leaving him with five children, ages two to fourteen. The grandparents took on more responsibility. Then in 2010 the other son and his wife were taken in a work place immigration raid and were deported, leaving the grandparents with their five children. In April of 2011, the widower son was also deported.
Hardship brought the family to a deeper bond with each other and a desire to be closer to God. They taught their grandchildren values, courtesy and discipline. They offered stability to children who had lost one mother to death and their other parents to deportation. Pompeyo, Elia and their sons struggled with what was best for the children. The parents wanted their children with them, but feared that they could not take care of them in Mexico. In all of this, the grandparents presented stability, love and strength to the children.
Disillusionment with the Church
In all of the movement, the children lacked the opportunity to receive their First Eucharist. They were not in one place long enough for the children to complete any catechetical program. In their last move, they were told that the children needed to be in a two-year program and no exception could be made. They were saddened, as they were discerning whether to go to Mexico to reunite the family or continue to struggle to make a home in the United States. They were discouraged with religious leaders and priests for not working with them to make sure that the children received the sacraments.
They heard about campesino ministries in other communities that offered programs more in sync with the lives of farm workers, but those programs were not in the area where they lived. They heard of a missionary who had a team of seminarians and lay people who offered a summer school for children, but had no idea where or who to contact. Pompeyo said, “I assumed it was just a myth.”  Then at a prayer meeting they heard that a missionary was starting a program 13 miles from where they lived and the next day was registration day. They registered seven children from 8 to 16 years of age.
Uncomfortable moment in the classes
The first day of classes there were 40 children. Eight more came into the class the next two days. On the fourth evening two mothers came asking that their three children enter the class. I balked and told them that since they were from a town, not living on farms and that it was the fourth night, we could take no more into the classes. Pompeyo thought, “I thought Padre was different, but he is like all the rest.” Then I told the class that I needed to speak with the mothers for a moment. Pompeyo said, “It was like he left the 99.” A few minutes later we welcomed them to the group and sent the children to join in the classes. Pompeyo said, “I saw you struggle with what to do, and you did the right thing.” 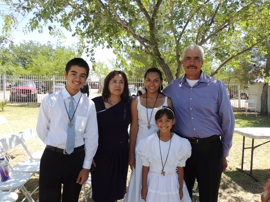 On July 1, 51 children received their First Eucharist. Several sets of parents had begun preparation to regularize their marriages. All the families brought food for a potluck celebration after the Mass. Several had celebrations with their families in the afternoon and evening. The mission team went to several celebrations, but it was very special with Pompeyo’s seven grandchildren. The joy of all ten children was obvious. Two of the children showed off their accomplishments from school as they took first and second place in public speaking competition for migrant education students in the state of California. One took first place and the cousin took second place for seventh graders. The best laugh came when the children told the one who took first place to not forget that she is the dumb one in the family. She got a “B” on her report card. The others had straight “A’s.”
On Friday after the First Communions, Pompeyo, Elia and the ten children went to Mexico to be reunited as a family with the parents of the children. Pompeyo said that for a time they thought of only sending the children, but the children said, “You can’t leave us.” For a moment they considered him staying to send money home, but Pompeyo told me, “Father, in 38 years we have never been separated. Now is not a time to start.”
Never underestimate a family of faith. This is only the story of one of the migrant families with whom I have had the privilege of coming to know. These are people on the margins of society that need our attention.