The Partnership for a New American Economy has released a new report that reveals how the rapidly declining number of field and crop laborers available to farms is hurting both farmers and the U.S. economy. 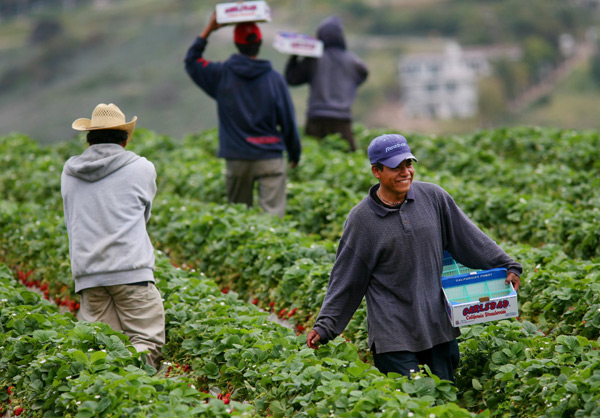 This drop in migrant farm labor over the past decade has created a severe labor shortage in many key parts of the country vital to American farmers and staple crops. It has also had an impact far beyond rural America: The lack of workers has not only hurt the ability of U.S. farms to grow and expand, it has cost our economy tens of thousands of jobs in related industries like trucking, marketing, and equipment manufacturing.

Findings in the report include:

Latinos Post also writes about the new report and emphasizes the role and impact of Latino laborers.

Ethical agriculture is not only how we grow food, but how we treat those who bring food to our tables. Catholic teaching about the dignity of work informs us that farm workers must be able to support themselves and their families through their work.

This also means that agricultural workers must be able to survive the risks associated with field work and food processing lines. Over many decades, Catholic Rural Life has borne witness to the great pain and stress experienced when a laborer works long days in the field or inside meat/poultry processing factories.

Farm workers have also been a critical concern of the U.S. Conference of Catholic Bishops. In Catholic Reflections on Food, Farmers and Farmworkers (2003), they renewed their commitment to lift up the situation of agricultural workers and to work to improve their lives and those of their families. Farmworkers are among the most vulnerable and exploited people in our land. Their situation demands a response from people of faith.