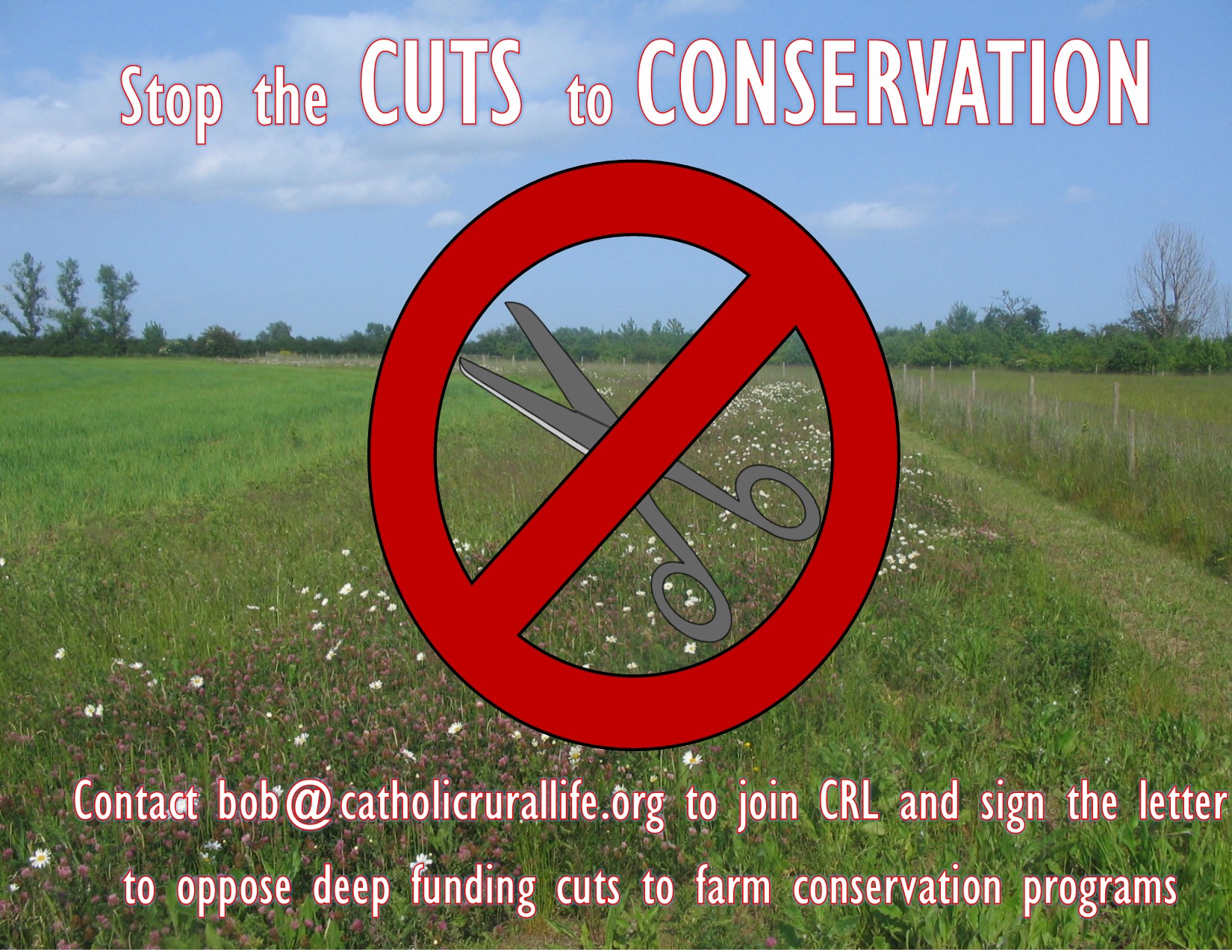 We are seeking organizational support – state and local – to join the sign-on letter due to be sent by May 1.

According to the Office of Management and Budget, the President’s FY 2016 budget request proposes hundreds of millions of dollars in cuts to the farm bill Conservation Title. This is in addition to the deep and serious cuts previously made in the 2014 Farm Bill.

The President’s request includes a 3 million acre cut to the Conservation Stewardship Program, a 30 percent reduction below the 10 million acres mandated by the 2014 Farm Bill.

The budget also proposes a 23 percent cut in funding for the Environmental Quality Incentives Program (commonly referred to as EQIP).

Catholic Rural Life joins with those who are strongly opposed to these proposed cuts. These groups are urging Congress, namely the Agriculture Appropriations subcommittees of both the House and Senate, to reject these and other cuts to conservation program funding.

The Administration’s proposal is shortsighted and would severely limit the capacity of farmers, ranchers, and foresters to conserve water, maintain their soil, and produce abundant food and fiber.

Agricultural conservation programs are the first line of defense in preparing for extreme weather events and avoiding the need for environmental regulations. Without the consistent funding provided by the Agriculture Committees in the farm bill, farmers and ranchers will not be able to implement common sense conservation practices.

Additional cuts to farm bill conservation programs would leave producers high and dry when trying to prepare for and manage drought, flooding, and other extreme weather. It would mean more water pollution and less wildlife habitat. It would drive up long-term costs for environmental mitigation, and threaten our nation’s food security.

As the Subcommittees develop FY 2016 appropriations bills, we urge you to keep the farm bill intact, reject the Administrations’ irresponsible farm bill cuts, and protect these vital programs and the public goods they support.

Contact Robert Gronski bob@catholicrurallife.org if you would like to add your organization’s or group’s name to the sign-on letter. (Individuals are asked to contact their elected representatives directly, especially if they are on the House or Senate Agricultural Appropriations subcommittee.)

Background note: Last year, the Agricultural Act of 2014 (the Farm Bill) consolidated or eliminated nearly a dozen conservation programs and reduced mandatory funding by $4 billion, with sequestration scheduled to cut an additional $2 billion. The House and Senate Agriculture Committees did their part to reduce federal spending and did so voluntarily. The cuts contained in the new farm bill were real, serious, and deep. Enrollments in conservation programs will decline by millions of acres in FY 2016; sequestration alone will cut $260 million from mandatory conservation spending in FY 2016.