Laudato Si and Agriculture: A Prince of the Church explains the connection

By Cardinal Peter Turkson on September 18, 2015

This article was published in our Summer 2015 magazine, “Laudato Si and the Countryside: Caring for Our Common Rural Home.” Click here to view the PDF version of this article, and visit the CRL Store to purchase the full magazine. 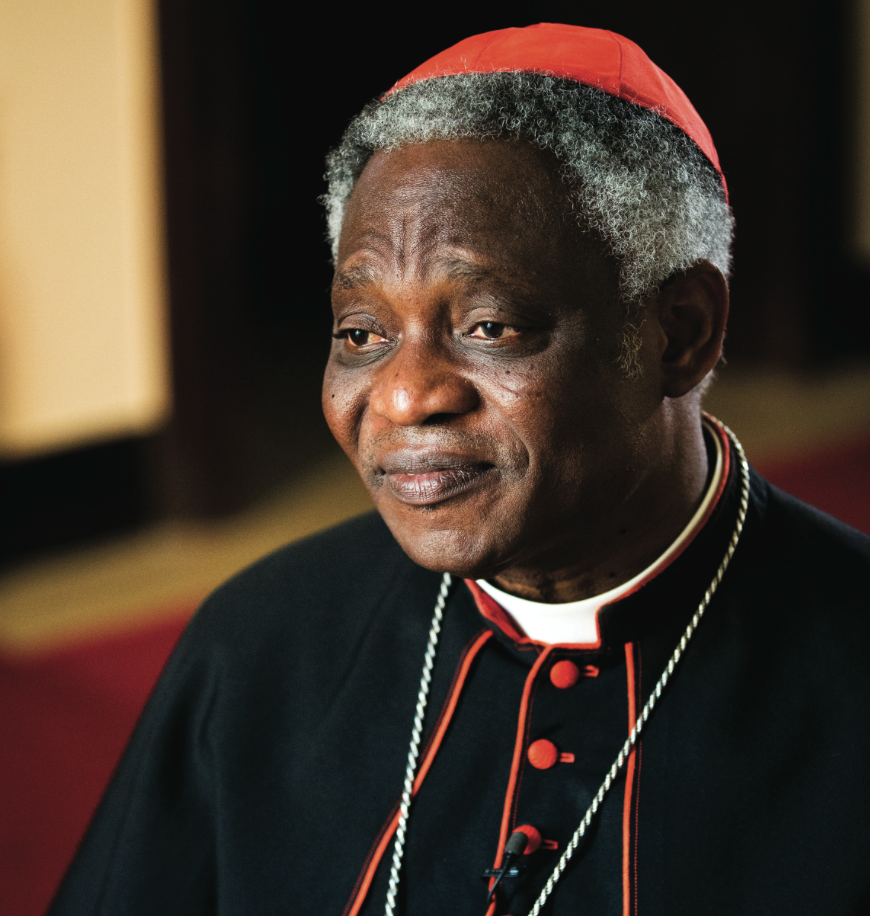 Two months ago, on June 18, Pope Francis released his encyclical letter on “Care For Our Common Home”, the environment. The home itself is in crisis; and within this home, so many people are hungry — millions upon millions of them.

Last October, at a gathering of the world’s poorest and most vulnerable, Pope Francis said that “Hunger is criminal. Food is an inalienable right.” He told people from peasant movements, landless farm workers and indigenous people that their fight for land, water and a sustainable environment is vital to all of us.

That meeting gathered participants of many faiths and of no particular faith background. Popes do not only talk to Catholics, particularly about crucial world issues. Saint John XXIII addressed Pacem in Terris to all people. Pope Francis cites this precedent and declares: “Now, faced as we are with global environmental deterioration, I wish to ad­dress every person living on this planet” (LS §3). Everyone – not just specialists or zealots or lobbyists – must consider some important, underlying ethical questions:

There are very loud voices that urge partial answers, misleading answers, self-interested answers and non-answers to the key urgent questions of environment, agriculture and food. I believe that a genuine response may be built upon three perspectives:

We are in the world

In Laudato Si the Holy Father emphasizes, “we ourselves are dust of the earth” (Gen 2:7); our very bodies are made up of her elements, we breathe her air and we re­ceive life and refreshment from her waters. We are part of nature, included in it and thus in constant interaction with it. From conception to the moment of death, the life of every person is integrated with and sustained by the awesome panoply of natural processes. This calls for a reciprocal response on the part of humanity – to nourish and sustain the earth that in turn nourishes and sustains us.

Agriculture is the practice of this reciprocity. From the very beginning, the Creator asks us to till the earth and to keep it. And farming is a constant backdrop in the Bible. The language of Jesus is full of illustrations from agriculture — tending flocks, planting, harvesting, building granaries and paying workers. Jesus assumes his listeners understand and respect healthy agriculture. This allows Him to tell parables about farms and farmers. In the parable of the good seed, Jesus talks about how seed reacts to different types of soil to teach what happens when people react in different ways to the Word of God (Mark 4).

But we have not done a very good job of tilling and keeping the earth. Humanity has been a poor steward of the environment, to the extent that Pope Francis notes that “the earth, our home, is beginning to look more and more like an immense pile of filth” (LS §21). And this environmental degradation has a direct impact on agriculture—through droughts and floods caused by climate change, depletion of freshwater resource, and loss of vital biodiversity.

The biblical narrative teaches us that “human life is grounded in three fundamental and closely intertwined relationships: with God, with our neighbour and with the earth itself” (LS §66). When one of these relationships is broken, the others are broken too. This is the essence of what Pope Francis calls integral ecology. It is why he says we need to hear “both the cry of the earth and the cry of the poor” (LS §49).

At the centre of Church teaching is the fundamental dignity of all human beings. We are made in the image and likeness of God. This expresses God’s infinite love for us. And a loving God would never wish untruth, bondage, injustice and strife for us. Rather, based on divine love and human dignity, our faith would have us embrace four fundamental values: truth, freedom, justice and peace. These four pillars are grounded in our divinely and lovingly created human nature — and this gives us an absolutely firm response when any such values are challenged or denied.

The common good comes before serving narrower interests. The goods or resources of the world have a universal destiny. Creation is a gift to the whole of humanity, not just a part. We are called to act in solidarity with those who lack access to these goods – with the large portion of humanity who suffer in the midst of plenty, beginning with those millions who are hungry while so much food is thrown away. As Pope Francis notes, “The Christian tradition has never recognized the right to private property as absolute or inviolable, and has stressed the social purpose of all forms of private property” (LS §93). With the Good Samaritan story, Jesus taught us that our common humanity is built on love and active compassion—not on commercial exchange and the individual’s ability to pay!

Every human being is born as a unique image of God. Yet we all share a common human vocation, which is how we acknowledge and engage our nature as humans. We have a vocation to develop our full humanity.

Work plays a large role in vocation. For Catholic social teaching, there is an innate dignity in the act of work itself. We share in the work of the Creator through decent and rewarding work. It cannot be ‘just’ a job, just career and earnings, if we treat work as part of God’s plan of love in history. It is the primary way that one’s vocation is fulfilled in this world.

A fundamental feature of Laudato Si is that Pope Francis integrates the human and the natural. The encyclical uses the terminology of stewardship only twice, but care comes up dozens of times. This bespeaks an intimate relationship that goes beyond management and accountability and the impersonal mechanics of the marketplace. There is more to agriculture than profits and losses. Putting the maximization of profit as the first principle contributes to environmental degradation: “Where profits alone count, there can be no thinking about the rhythms of nature, its phases of decay and regeneration, or the complexity of ecosystems which may be gravely upset by human intervention…. whatever is fragile, like the environment, is defenseless before the interests of a deified market, which become the only rule” (LS §190, 56). So the Holy Father criticizes the naive idea that “the problems of global hunger and poverty will be resolved simply by market growth” (LS §109) or the lure of what he calls “the magical conception of the market” (LS §190). For “by itself the market cannot guarantee integral human development and social inclusion” (LS §109).

It is abundantly clear that agriculture commands influence over immense resources – the land that feeds us and houses us, the water, the soil and its nutrients. Is it legitimate to worry that humanity may now have tilled too much and kept too little? The relationship between human beings and creation has become confrontation, says the Pope, based on mastery and dominion rather than wise stewardship—let alone faithful care. This leads to the idea of “infinite or unlimited growth” which is “based on the lie that there is an infinite supply of the earth’s goods” (LS §106).

Turning to big business, the position of Pope Francis is nuanced. He sees it as a “noble vocation” that needs to put its creativity and ingenuity at the service of humanity and the common good. But he has harsh words for businesses that prioritize their own short-term profit in a way that harms people and the earth. For instance, some multinationals in developing countries can “leave behind great human and environmental liabilities such as unemployment, abandoned towns, the depletion of natural reserves, deforestation, the impoverishment of agriculture and local stock breeding, open pits, riven hills, polluted rivers…” (LS §51). Surely large agricultural interests can practice subsidiarity! If so, they will allow and even assist other farming structures – family farming in some regions, subsistence farming in others – to flourish alongside agribusiness. Is our system more geared to produce money than food? One difficult case is how local food production is curtailed in favour of growing crops to produce ethanol for use in cars – a clear impact of the global economy.

Advanced technologies also receive attention in the encyclical. Technology is not all bad. The technical ability to increase crop yields has done wonders for health and nutrition—think of the “green revolution”. But Pope Francis is making that point that technology unmoored from morality can lead to domination over people and the earth, especially when technology is in the hands of people with great resources. What results is a technocratic paradigm that tends to dominate economics and political life.

Pope Francis talks specifically about these new biological technologies. Can genetically modified organisms (GMOs) and chemical fertilizers make their contribution without endangering God’s creation, with all its species – God’s original gift to us all? And are long-term risks such as the growth of resistance to herbicides and pesticides included in how we assess technological innovations?

The Pope paints an ambiguous picture. He frames the debate by noting that those who possess particular gifts for the advancement of science and technology should use these God-given talents to serve others. Talking specifically about genetic modification, it is difficult to offer a general judgment. On one hand, there is no conclusive proof that GM cereals are harmful to human beings. But on the other hand, GMO agribusiness can create problems—such as the concentration of productive land among a few owners, the disappearance of small producers, the destruction of ecosystems, and the loss of opportunities for rural workers. So this issue must be handled prudently.

Displaying his broad grasp of actual practices, Pope Francis also points to avenues of hope. He calls for a move to “more diversified and innovative forms of production which impact less on the environment” (LS §191), and he is particularly concerned about small-scale production: “For example, there is a great variety of small-scale food production systems which feed the greater part of the world’s peoples, using a modest amount of land and producing less waste, be it in small agricultural parcels, in orchards and gardens, hunting and wild harvesting or local fishing. Economies of scale, especially in the agricultural sector, end up forcing smallholders to sell their land or to abandon their traditional crops” (LS §129).

Pope Francis offers several more practical, feasible suggestions: “Agriculture in poorer regions can be improved through investment in rural infrastructures, a better organization of local or national markets, systems of irrigation, and the development of techniques of sustainable agriculture” (LS §180). He specifically encourages cooperatives of small producers

These are global issues; their urgency and scale are apocalyptic. Pope Francis calls for a global consensus that would lead “to planning a sustainable and diversified agriculture, developing renewable and less polluting forms of energy, encouraging a more efficient use of energy, promoting a better management of marine and forest resources, and ensuring universal access to drinking water” (LS §164).

Our human bond with the earth is foundational. Humanity is the factor that opens the earth up to new possibilities. Will there be blessed innovations and new harmonies, or new imbalances and cumulative decline? The outcomes depend on human choices.