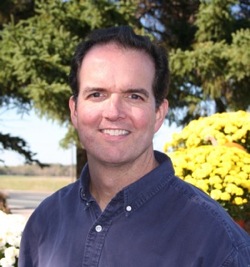 This past spring I participated in several meetings in Rome between the International Catholic Rural Association (ICRA), of which NCRLC is a member, and individuals and organizations such as the United Nation’s Food and Agriculture Organization (FAO); the Secretary of State for the Vatican; the Pontifical Council for Justice and Peace; and his Eminence Raymond Leo Cardinal Burke. Each meeting opened up opportunities for significant discussions of the role of faith in agriculture, stewardship of natural resources, and rural ministry and outreach throughout the world. As meaningful and productive as the meetings were, there was one unexpected meeting that I will never forget.

Dr. Christopher Thompson (NCRLC Board member), my wife, Sally, and I attended a General Audience of Pope Francis in St. Peter’s Square. ICRA provided tickets, but we had no idea where we were going to sit. This was my first time attending a General Audience of any pope. Our hosts guided us through several security checks, and we ended up sitting in front row seats on one side of the platform near where the pope delivers his weekly address.  After Pope Francis’ teaching, he stepped down from the raised platform and began to greet people who were now standing in the front row. We immediately realized Pope Francis was coming our way. “What do you say to a pope?” I thought to myself. When he came up to us, he smiled and shook our hands warmly, and said, “Pray for me.” Pope Francis’ humility and genuine love touched me deeply. We were then quickly whisked away by the security guards after the pope had passed, but we lingered for a while in St. Peter’s Square wondering out loud, “Now what? Where do we go from here?” It was very much a “mountaintop experience.” 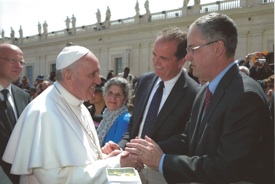 As I reflected on the event several thoughts came to mind. I thought about the tremendous gift and blessing we had received. And with this gift comes responsibility to share it with others who may not have the opportunity to meet Pope Francis in person. I thought of the people I work with in rural communities in the United States, laboring faithfully for Christ in very remote areas of our country, far away from the heart of the Church, yet never far away from Christ. I also thought about the truth that we need each other. The Holy Father is praying for us, and yet he also needs our prayers. He humbly asked us to pray for him. We need one another. We need to encourage one another in our work in food and agriculture issues, in stewardship of God’s creation, and in addressing rural poverty—both physical and spiritual. We need to be open and honest with one another in how we can help and support each other with our unique gifts and talents.

This Summer 2013 issue of Catholic Rural Life, entitled Lay Leadership: The New Evangelization in Rural America, explores the many dimensions of developing lay leaders. There is a need in the Church to develop competent, confident and faithful leaders willing to take steps of faith in their communities. We are called and gifted by Jesus Christ to participate in the new evangelization. The question is, are we willing to respond to his call? I hope you enjoy the variety of articles sharing how different groups are saying “yes” to God’s call in their respective rural communities.

This article originally appeared in the Summer 2013 issue of Catholic Rural Life magazine.