Farm income falls: What does it mean? 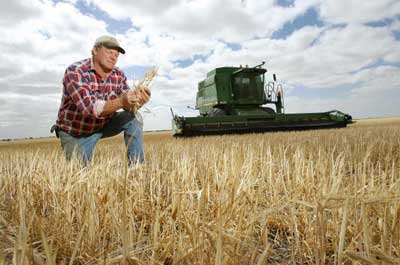 As farmers prepare for the harvest season, we are reading reports that farm sector profitability is expected to weaken in 2015.

According to the Economic Research Service of the USDA: “Both net cash and net farm income are forecast to decline for the second consecutive year after reaching recent historic highs in 2013 (in nominal terms). Net cash income is expected to fall by 21 percent in 2015, while the forecast 36-percent drop in net farm income would be the largest since 1983 (in both nominal and inflation-adjusted terms).”

Does this mean that farm families are hurting, or at least feeling the pinch?

This depends on the kind of farm operation – commodity crop, livestock operation, dairy, poultry, fruits or vegetables – and which part of the country the farm operates. Local climates and weather conditions certainly play a role, so we realize the “big snapshot” of farm prices and incomes can readily hide what some farmers are experiencing. Some are doing very well while others may be on the verge of departing the farm sector completely.

We are aware, however, that many farm households greatly depend on off-farm income for their total family income, especially those with smaller farms. Indeed, off-farm income contributes substantially to their family needs. Farm households (on average) derive up to two-thirds of their off-farm income from wages, salaries, and operating other businesses, while the remaining portion comes mostly from interest, dividends, and private and public transfer payments.

According to latest available figures, farm household median income remains higher than the median income of U.S. households, which was $51,939 in 2013. Depending again on which part of the country the farm operation is located, farm families can have a total annual income of $80,000 or more.

Another way to look at it: they are supporting the farm rather than the farm supporting them. They see farming as a way of life – indeed, a vocation – and want to live and work on the land despite economic trends.

But here’s the thing: At some point, a continual loss in farm income can eventually wear down the best intentions and desires. Our mission at Catholic Rural Life is to advocate for public policies that make it possible for farm families to make a living on the farm, not off of it.

That is why we advocate for federal farm support programs, even as we call for systemic changes to farm policies that will create fair and just farm prices.

For now, though, U.S. government payments to farmers are necessary. Such payments for 2015 are forecast to rise to $11.4 billion. These will help cover production expenses and allow farm families to hang on for another year rather than exit from farming altogether.

So this harvest season, we offer our prayers for the family farmer so all that pursue this vocation may do so all their lives and for generations to come.